I'm realizing how the loss of Alice, Francesca, Emmy Lou and Dottie in a short period of time has caused me to be aware of the fragility of life on a daily basis.  Every day when letting the chickens out for their free-range time, I tell them to be careful and I anxiously count heads when I call for their return to the coop.  I need four to return.

So, let's tell the girls how special they are. 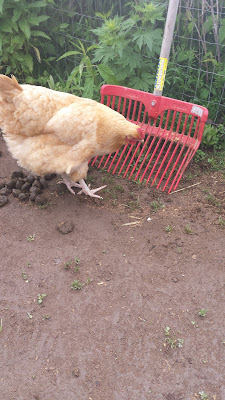 My confession is this.  I would be heartbroken if something happened to Sweet Pea. 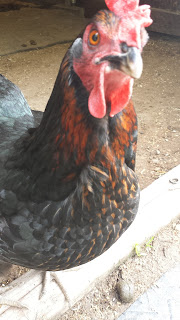 This little girl is actually quite full of personality, but instead of "helper" I'd term Jo "the snack queen".  In the mornings, as soon as I open the big door to the coop, out they all rush to do some early exploring.  But sure as shootin', Jo will rush back to see if any snacks have been distributed.  Often she's so anxiouson,  she'll sit in the snack bowl.  I have to lift her out and explain that doesn't really expedite the process. 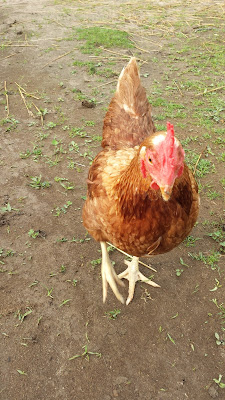 Ruby Dee is one of the two remaining original girls (the other is Sweet Pea).  Ruby used to be my helper but apparently relinquished the position for reasons unknown to me.  And she does tend to whine.

On a recent morning instead of throwing them banana, they got nice juicy blueberries.  Ruby checked one out and just looked at me.  Clearly that blue thing wasn't a banana.

Her other idiosyncracy.  Pecking feet.  Sandaled feet.  Although (knock on wood) it hasn't happened recently.  when it does I tend to first yelp and secondly yell out "Ruby Dee, knock it off!!"  From the look on her face, I know she knows. 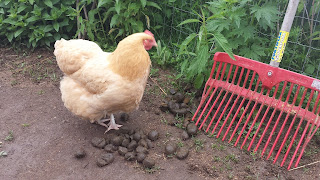 This is Buffy.  I dare you to differentiate between Buff and Sweet Pea.

Buffy is the loner and, although has been with my crew for two years, is still somewhat skittish.  Jo, on the other hand, has been here for two months and feels right at home. 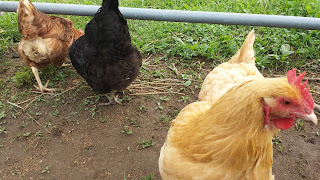 OK, readers.  On the count of three, remind everyone
Stay Safe, Please!!
Posted by Janet @ My Miniature Donkeys at 8:02 PM 6 comments:

If you drove up to our home, you might look askance at the "beauty" of a Christmas wreath still hanging.  Your left eyebrow might raise in a quizzical look as you turned to say "Why?" 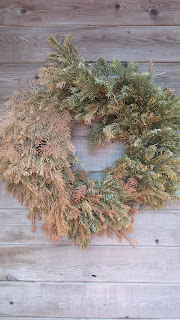 It used to be a beauty, but it's luster has faded.
And yet it remains, because... 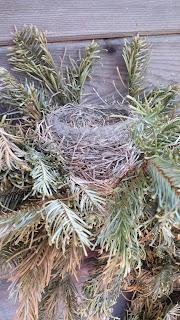 Two robins selected that innovative location to build their spring nest.  A few weeks ago we would have disrupted the eggs if the wreath had been disturbed and now, we would disrupt the babes. 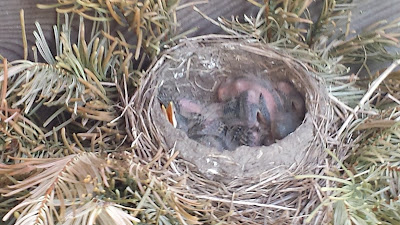 Look carefully, and you'll see a beak and a head.  We think there is at least one more young 'un in there, but Rick was perched on a ladder trying to get a peek so we're not entirely sure about the full brood.

So, it will stay Christmas at our house for a bit longer.  And that's fine with us.
Posted by Janet @ My Miniature Donkeys at 6:30 PM 2 comments:

If I were to be totally honest about what's going on at our little farm, I would have bad news yet again.  Seems like it's been a steady stream of bad news on the blog.

Emmy Lou has been going steadily downhill the past few days.  After some chicken health sleuthing, I had hopes of bringing her around, but it's not to be.  Today I've been determining the most humane means of euthanasia.

Just went out to check on her and I can't believe she'll last the night.

I'm not sure I'll ever get used to this death business. 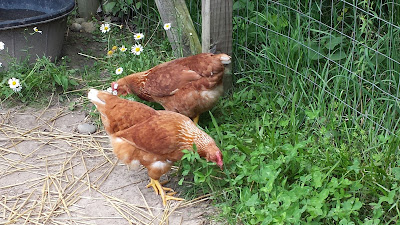 Emmy Lou on the right

Posted by Janet @ My Miniature Donkeys at 6:53 PM 9 comments:

When A Donkey Has A Darn Scratch

Carpenter extraordinaire in this house performed his magic again.
And voila, a scratching post for two donkeys. 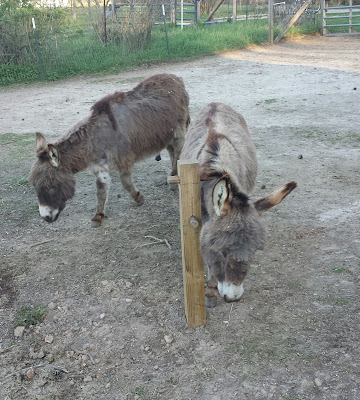 I will assure you, Luigi and Gabby find it a most useful addition to the donkey yard.

The bare naked version (without donkeys) 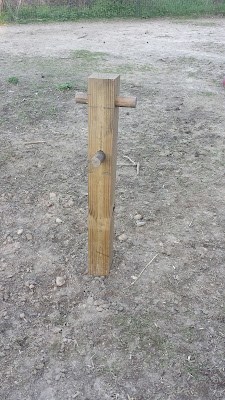 Now when I roll the manure wheelbarrow in for the morning clean-up, Luigi does not attack it with a passion and rub and rub and rub.
He has the real deal.

Posted by Janet @ My Miniature Donkeys at 6:42 PM 3 comments: