Slow But Sure Wins the Fly Spray Race

Slow but sure wins the race.
Indeed.
With donkeys.

Using fly spray on Sugar and Spice has been an interesting process, but halelujah, I think we've won the battle.

When fly season began, it seemed clear they had never been sprayed. If I so much as appeared with the bottle in my hand, they'd hightail it outta Dodge.  So the step process began:

1.  Entice everyone into the barn with a "treat" (actually a supplement but they gobble it up).
Spray Luigi and Gabs (who have never been a problem for the past 8 years).  Put a halter on S&S with leadline.  One person holds the donk while the other sprays.  Release the beasts.

After a couple of weeks --
2. Repeat Step 1, omitting the halter.  Spray Luigi and Gabs.  One person throws the leadline over Sugar/Spice holding securely and the other sprays.  Release the beasts.

After a few days --
3.  Repeat Step 2, omitting the leadline.  One person puts a hand on Sugar/Spice's back or neck to steady them while the other sprays.
It was critical to always spray Luigi and Gabariella first to show S&S they didn't die from the procedure and, in fact, didn't pay much attention.  Release the beasts.

After a few days --
4.  Repeat Step 3 omitting a person.  The procedure requires only one person .Spray everyone in the correct order.  Release the beasts.

The beasts (in order of cooperative attitude): 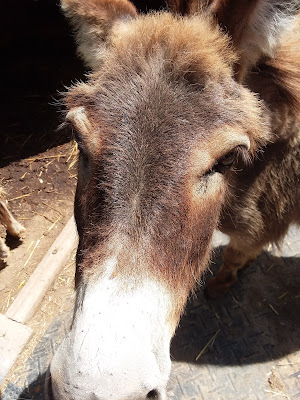 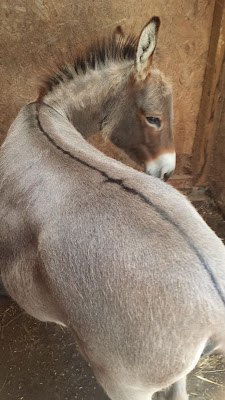 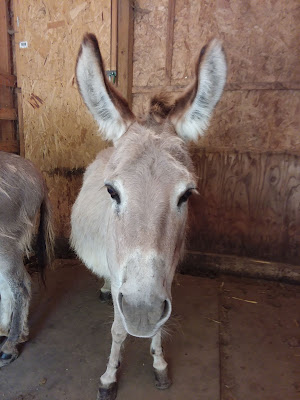 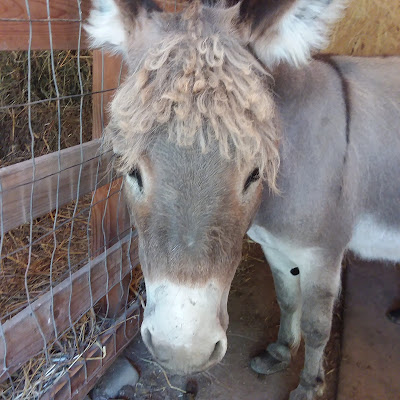 Proud as punch of my two little girls!
Posted by Janet @ My Miniature Donkeys at 6:41 PM 3 comments:

We are ever so close to having the new coop fully integrated.  But not quite.

The last time you saw it, we had pieces lined up outside the donkey yard.  Well, just take a look now. 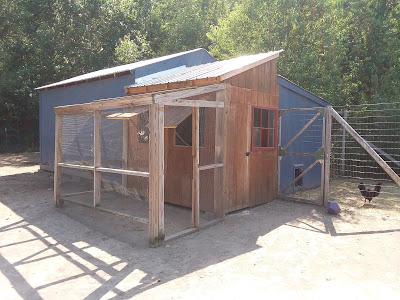 The "porch" has not been secured completely, but other than that, we're ready to roll.  Let me give you a tour of the construction process -- my husband needs a huge bow of recognition for all the hours spent integrating the two structures. 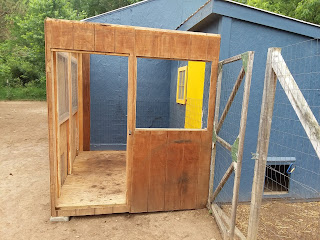 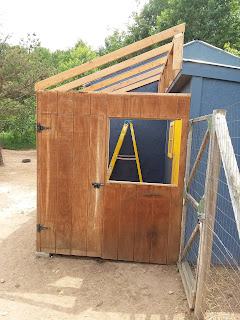 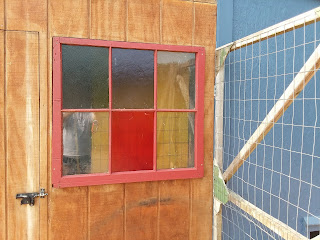 Yes, part of the package was a stained glass window - pretty swanky 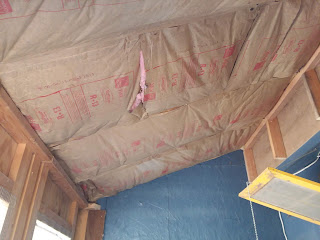 Because the new roof is metal, Rick thought the heat build-up could be offset by insulation 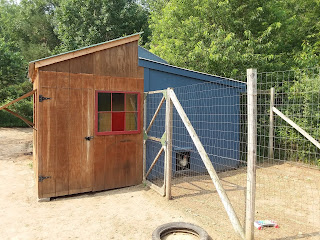 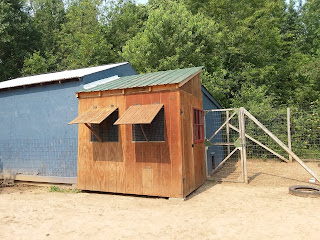 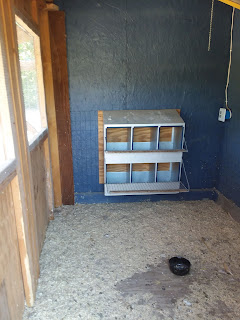 Nesting boxes in and ready 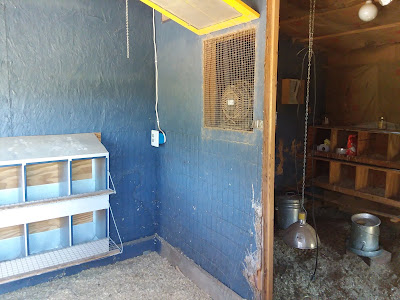 Here, we're standing in the new coop looking through the old outside door to the old coop

Always loving a new project, Rick said, hmmm, what to do with the leftover roofing pieces (because we're cozied up to the old coop, the other half of the roof wasn't necessary)  And voila, a new shade area for the donks. 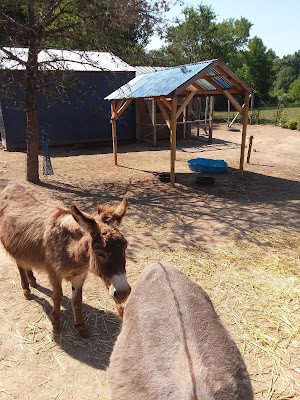 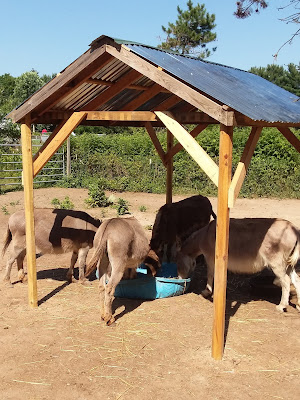 Pretty darn nifty, don't you think.  Rick is one darn handy guy to have around.  Guess I need to thank him properly!

Posted by Janet @ My Miniature Donkeys at 6:28 PM 4 comments:

My duties at SASHA have shifted a bit and that shift allows me to meet and greet most of the residents as I wash and fill water buckets and troughs.

I requested this change; I missed walking about and talking to everyone.

These are a few of the SASHA residents I've schmoozed with recently (not in order of preference - I don't want any of the highlighted to throw an accusing finger). 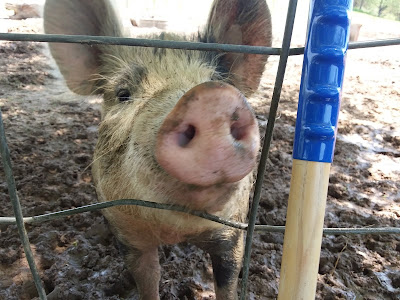 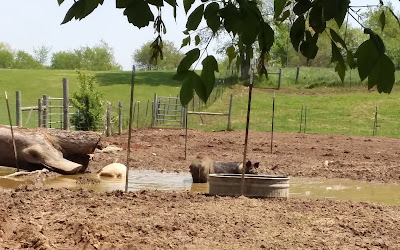 These three geese wander the pasture directing their loud comments to various recipients, although it's often difficult to tell just who those recipients are. 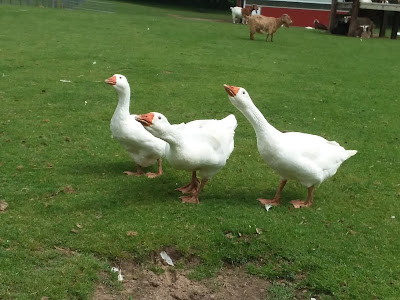 For example, I thought they were unhappy with this goat, but continued their comments after he had passed. 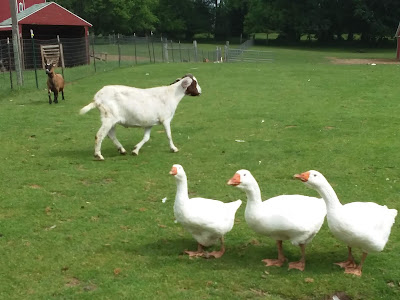 I know I've introduced you to Bhima, the Gyr Ox.  The Jersey 5 (saved from the veal industry) adore Bhima and I captured that adoration from one of the 5.  We're talking many many many kisses. 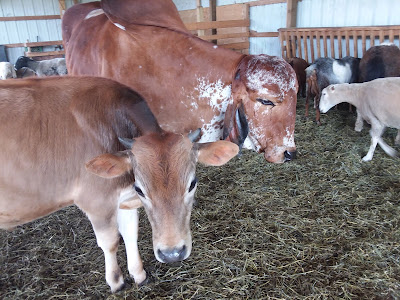 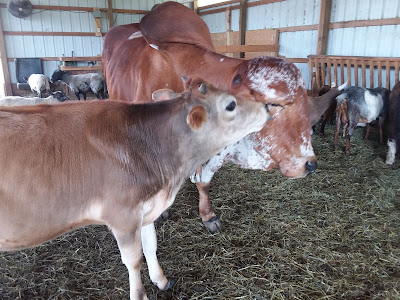 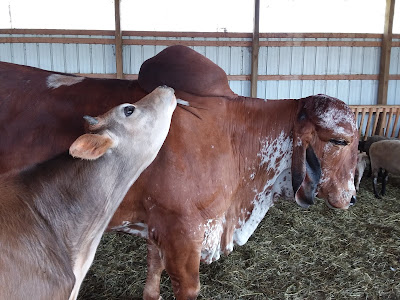 And I've saved Harley for last.  I would take this boy home in a sweet second.
He lost his Dane partner only recently and is slowly rebounding from his grief.
Here he has found some innovative places to catch a nap on a warm summer day. 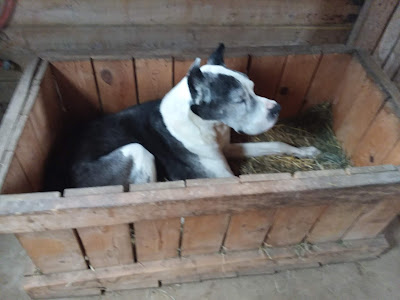 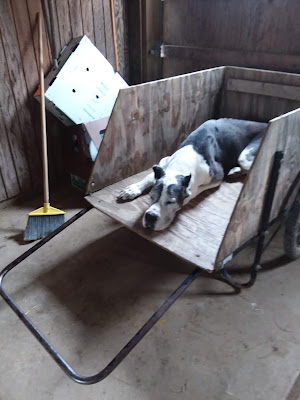 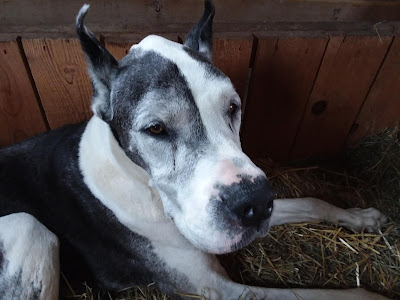 If you'd like to see more of the Farm or donate to the Midwest's largest farm animal sanctuary, visit
SASHA's website
Posted by Janet @ My Miniature Donkeys at 9:06 AM 9 comments: