Boy, Has It Been a Week

Can I tell you about my week?  Cuz it's been a doozy.  And the fun keeps  on going.

Let's start at the beginning.
Last Monday the four donks got into the hay aisle and ransacked the supplement can and the grain can.  For those readers not acquainted with the perils of the equine world, this can be kind of catastrophic.  All four were lethargic (well, except Gabby), but Luigi was the worst.  I was pretty worried the boy was going to colic.  Got him up and walking to stimulate some gut action.  I won't enumerate all my worries and reactionary techniques, but long story short, everyone survived.  We've doubled locked that area of the barn and I've decided to eliminate the grain; it was a once-a-week treat. 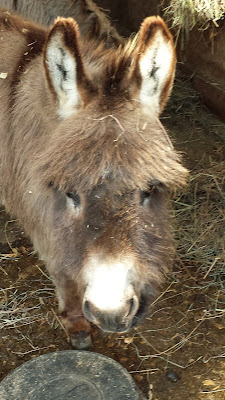 The next day Faith chose to sniff out the hidden Easter candy and devour it.  Yup, chocolate.  Yes, she too survived. 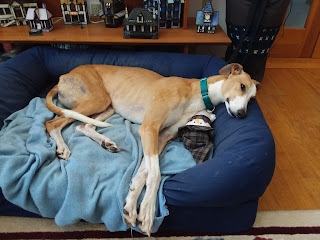 Now Ruby Dee is acting pretty strangely and I don't have a good feeling about this one.  I've followed the DIY suggestions for an egg-bound chicken which her symptoms suggest, but have not seen any improvement.  I'm very afraid we're going to lose her. 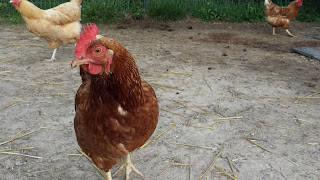 Earlier in the week I learned my teeny tiny job at a local bread store will end.  I've enjoyed it since I retired from my "real" job four years ago and will miss my boss and my customers.  He has two stores and is closing the one I worked at.

Then there's the area hay shortage.  We got the last load from my hay guy on the 23rd so I made call after call (see a pattern here?) to find some hay to get us through to this year's first cutting.  A huge thank you to my former horse farm owner, Dee, who sold me some of her stash.

The salvation in today's activities was my yoga class.  I've been a teacher for many years and have a most wonderful class.  Today concluded our spring session, with the surgery date timed for it's conclusion.  I won't be able to rejoin them for a few months and will miss the laughter, the groans, and the interest in all things yoga.

So dear readers, this may be the last post for a bit.  Sitting at the computer will be very owwie for a while after this knee gets "fixed".  Send me good thoughts and I'll return with the antics of our crew as soon as I can.
Posted by Janet @ My Miniature Donkeys at 6:19 PM 4 comments:

Finally, winter ickiness from the chicken coop has been cleaned out.  Hallelujah!

The girls were passionate, if not effective assistants.  In my way pretty much the whole time.  But now we have clean shavings fit for the little princess vultures.  Of course it didn't stay poop-free for very long.  Alas. 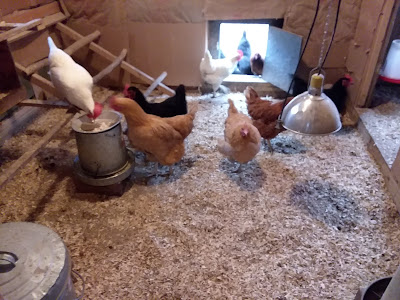 And the second bedroom in their 2-bedroom condo. 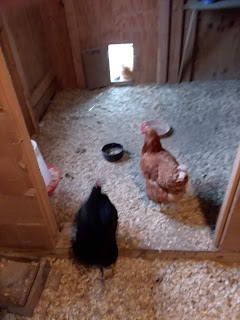 The far door leads to the porch... 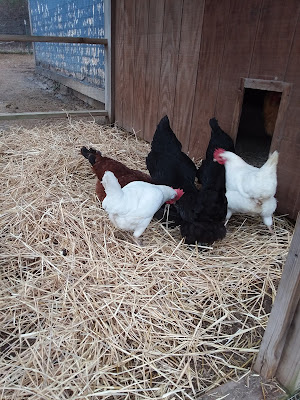 ... filled with fresh straw.  I hadn't realized how much straw I had gradually put in there over the past few months; it took two mighty full wheelbarrow loads to cart the soiled (that's a pretty charming word for what we all know it was) straw away.

But now for the BIG news.

The donkeys' favorite farrier, Koren, came for the first spring visit today to provide pedicure services and little Sugar, who usually runs away and has to be corralled into the barn to get worked on, was a cooperative angel.  It's a huge turnaround for this little girl and I'm pleased as punch. 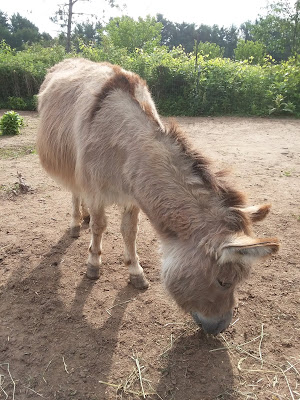 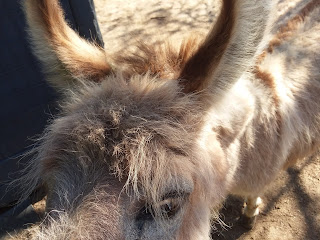 Because of her exemplary behavior, she was rewarded with many carrot pieces, rubs, and "what a good girl"s.  I hope the next farrier visit goes even better!
Posted by Janet @ My Miniature Donkeys at 5:49 PM 6 comments:

It is a heretofore little known fact that donkey water is superior in every way to chicken water.  Much much more delicious. 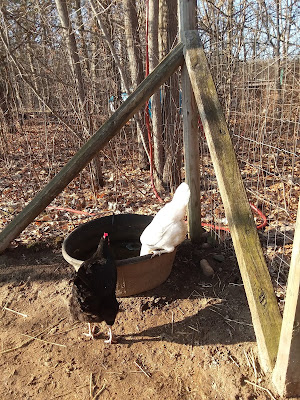 Posted by Janet @ My Miniature Donkeys at 7:24 PM 2 comments:

Oh yes, oh yes.  It took us an interminably long time to get here, but the season of revitalization has arrived.
Spring, spring, spring.

And the irrefutable signs?  Donkeys taking luxurious sun baths, instead of huddling in the barn. 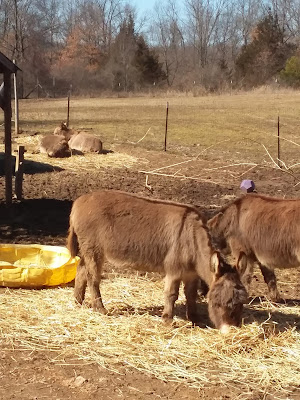 Check out the two in the background

And then there are the sand hill cranes.  We have had a resident couple in our rural neighborhood for years. They slowly wander from yard to yard on those long stilt-like legs.  So peaceful.  Although they have raised the ire of neighbors by meandering through their vegetable garden, grazing at will.

The past few days they've been checking out our pasture, but I just have not been able to catch a good photo.  Instead I'll give you a past look at the couple.  They just make me smile. 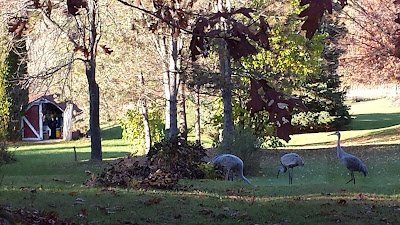 Now I'm assuming the same couple has returned year after year, but perhaps the offspring have taken over residency. 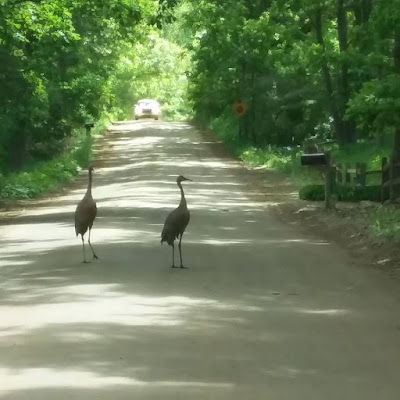 Posted by Janet @ My Miniature Donkeys at 5:48 PM 4 comments: