A few evenings ago, when I went out to lock up the coop, Fluffy would not leave the nesting box.  Nope, not gonna.
So, I let her be.

Rick went out to feed the next morning and I asked him to take a good look at her.  I, of course, jumped to the conclusion she was sick and I immediately started refreshing what to do for a bound egg.  Rick immediately leapt to the conclusion she was being broody.  We've only had one other girl get broody so we don't have a lot of experience with that chicky behavior. 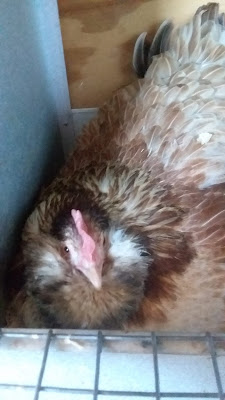 Turns out Rick had the better guess.  Nuts!

For two days we gently, but forcefully, removed her and told her she had to go get a drink and eat a bit.  She did a little back-talking but obliged.  And we'd find a nice pile of eggs under her. 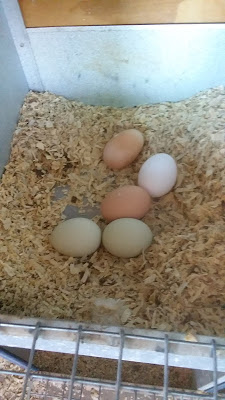 Often, everyone likes to use the same nesting box so she could brood over a bunch of "babies".  (We have 12 boxes, but hens are fickle.)  I tried to explain the facts of life to her about the boy roosters and the girl hens, but she shut her eyes, closed her ears and that was the end of the discussion.

Each time we went out, back she appeared in the nesting box.  Until yesterday.  She gave up trying to be a mom and scooted out with the rest of the girls in the morning.  Whew!  Short-lived crisis.

Speaking of moms, look what I just discovered today.  Next door. 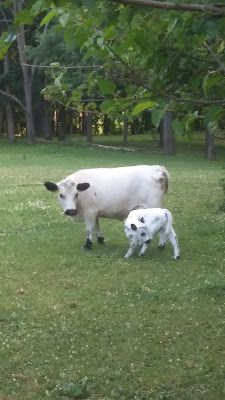 And finally, speaking of cows, for those who are looking to ditch dairy, my new favorite non-dairy yogurt is da bomb (as my vegan cousin proclaimed). 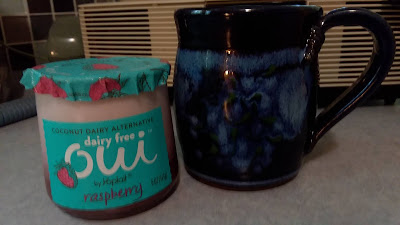 Easily available at Kroger grocery stores in my neck of the woods in Michigan and, I've been told, also at Costco.  It is totally deelish.  And no calves were deprived of milk to make it.  Yes!
Posted by Janet @ My Miniature Donkeys at 6:59 PM 1 comment:

I thought we were living together amicably.  Mice would skitter out of sight in the chicken coop and I didn't think much about it.  We have the philosophy live and let live.  I'm even trying to find a humane way to keep the flies at bay (without much luck), but those sneaky mice crossed the line.

We knew they were helping themselves to chicken feed, but we finally put our feet down and said enough!

Instead of setting the feeder on wood blocks as we normally have done, (to keep it out of the shavings), Rick hung it.  Thinking it would be too high for the mice to sneak into. 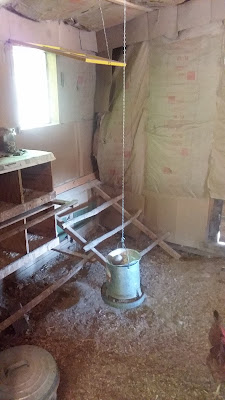 Since we took away one food supply, the mice turned to chewing their way through plastic containers in which we keep/kept the wild bird seed (treats for the girls) .  Sneaky little devils. 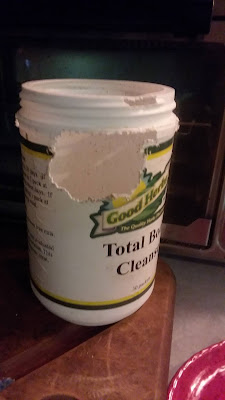 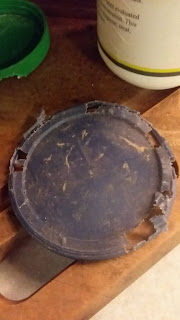 So we've switched to glass containers, but the feeder has to be repositioned... again.  they can still get into it.  I don't mind giving the mice a little handout, but not when I'm feeding the girls organic feed, plus some pricey higher protein feed.  No.

And I know you've all be waiting anxiously for another donkey video.
Here you'll find Luigi attesting to the fact Equine Senior is lip-smacking good.  This is after he snuck into the barn and confiscated some of Spice's portion.  The others congregated around absolutely gob-smacking certain I had treats hidden in my phone.

Posted by Janet @ My Miniature Donkeys at 5:52 PM 3 comments:

Yes, I Have a Favorite

Sweet Pea is my favorite chicken.  There I've said it.
Yea, yea I know you're not supposed to have a favorite child.  But I do.

Long time readers will know she's the only hen left of the original four from 2015.  My first foray into the world of clucks.  And longevity makes the heart grow fonder. 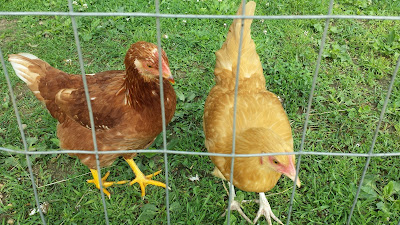 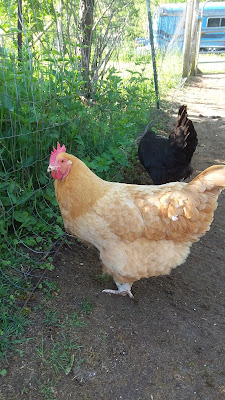 And a good helper 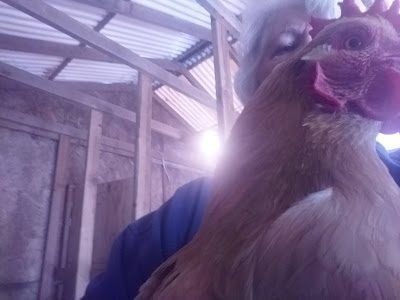 Facts about Sweet Pea you really need to know --
She knows her name and will come from the furthest corner of the pasture when I call
She has a distinctive voice -- I know immediately it's her without looking
She loves to help clean up donkey manure -- really
She let's me pick her up, but only because I want to -- it's not her favorite thing to do
I love her.
Posted by Janet @ My Miniature Donkeys at 6:40 PM 1 comment:

Some mornings are just about perfect.  Mild temps, a slight wind, the donkeys cooperate, the chickens come when called.  The problem is not all the elements gel every morning; bits and pieces are perfection and then there is the rest.

Here you have those bits and pieces.

When I enter the donkey yard, the girls are always chatting up a storm.  I've come to the conclusion they have early morning team meetings knowing I won't be there.  And no, I have never received an email with the agenda.  Coincidence?


Donkeys much contentedly.  No bickering, to each other or to me.  Ahhh...


Now to get all these peaceful moments in one package.  That would be heaven.
Posted by Janet @ My Miniature Donkeys at 6:54 PM 3 comments:

Sometimes it's difficult to live with a sneaky donkey.  Named Luigi.

It takes some quick maneuvering to get Spice in the barn and close the gate before anyone else wises up.  I don't always succeed.  Which complicates the process greatly.
And I have to make sure the chicken coop door is closed at the back of the barn so Spice doesn't saunter in when she's done.
And I have to make sure Luigi doesn't try to get in the barn to share.  I don't latch the gate so I can continue to do chores while she eats.  Luigi is the only one who has figured out all you have to do is push on the gate and voila, you're in.  Sugar and Gabs haven't processed that yet.  So my eye is on Luigi. 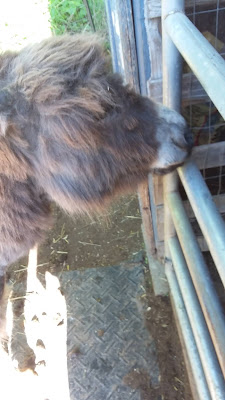 Here he has spotted Spice eating something which must be very very special.
And then the games begin. 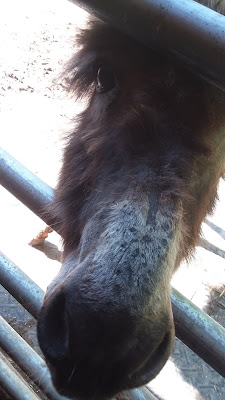 It takes a bit of muscle to stop a 300 pound trickster from opening the gate. 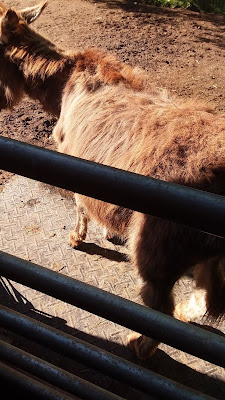 And then there's the backward approach.
Donkeys have a behavior not shared with horses in which they slowly, step-by-step back up to the object in their focus. I swear they think they're invisible.  I'm not sure if this was his thinking in the photo above.

Sometimes if I hold the gate closed for a few minutes he'll lose interest and wander off to eat hay with the other girls and I can actually get some work done.

But not always.
Posted by Janet @ My Miniature Donkeys at 6:30 PM 2 comments:

What a sight greeted me earlier this week uponst approaching the donkey yard.  I think I probably just stood and stared for a few moments. 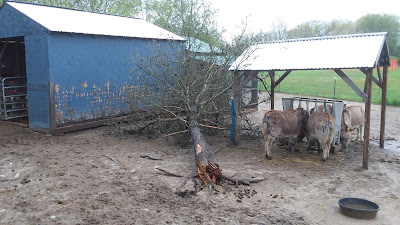 We had had two days of rain and some wind (nothing gale force), and clearly this little tree had seen better days.  But it had been in the donkey yard since the donks arrived so its removal still makes me pause.

Thank goodness (!) no donkeys, chickens, or structures got in the way when it toppled. 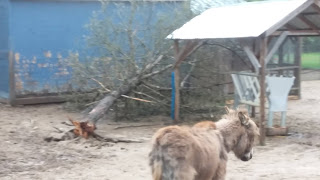 To change subjects -- today The Donkey Sanctuary hosted several videos from their farms in the U.K.  What fun!  I even took some notes.
If you'd like to take a peek -- Sanctuary From Your Sofa

And, I hope you're all watching "Saved by the Barn" on Animal Planet, Saturdays at 9:00 pm ET.
Highlights from activities at The Barn Sanctuary are featured each week.  I'm sure I've mentioned Barn Sanctuary previously; they're located about an hour south of me and I've had the opportunity to volunteer a couple of times.  Hard work, but the volunteers and staff are welcoming and make the tasks fun.
Tune in if you can!

Posted by Janet @ My Miniature Donkeys at 6:29 PM 1 comment:

We're oh so close to flinging wide the pasture gate and allowing the donkeys a bit of time to luxuriate in new grass.  But not quite.  A few more inches of new growth would be ideal.  We've had rain and rain and more rain the past couple of days and are due for some temps in the 70's so the grass should shoot up.  I know the donkeys will be ecstatic.

But in the meantime, I sit with them in the driveway so they can munch munch munch on something other than hay. 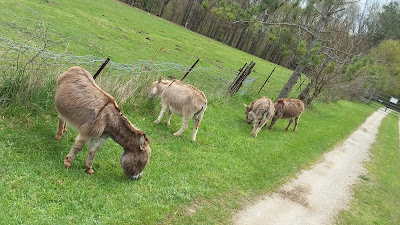 We're looking toward the house 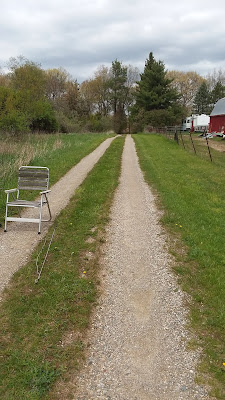 and the view toward the road (with my repaired chair)

Sugar gets the spotlight, up close and personal

Posted by Janet @ My Miniature Donkeys at 6:41 PM 2 comments: