It's been a week.  And not one I wish to repeat.

No sooner did I tell you about the damage the donkeys had worked so carefully crafted, than they decided they weren't done.  This is the door from the rear of the barn to the chicken coop. 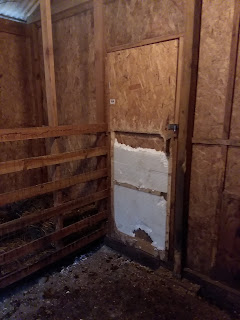 Rick had built the door of plywood sides and a styrofoam core. 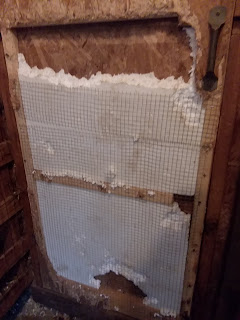 Yup, half of the wood gone with attempts at the styrofoam.  Once the mess was discovered, he stapled hardware cloth over the remaining door to keep them off of it.

Have I had the warm and fuzzies toward the donkeys this week?  Take a guess.

The worst of the week's news is we had to euthanize Buffy. 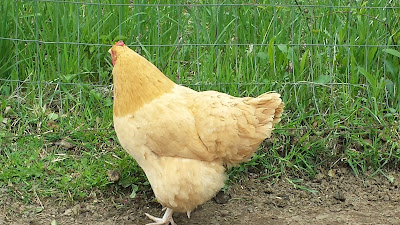 Clearly I did not choose a strong enough medication at the onset of symptoms and her condition deteriorated.  I can't tell you how guilty I feel about this.  I've done an abundance of research about poultry antibiotics and what I believe to have been her condition.  And attempts to find a poultry vet.  And attempts to find an injectable version of the antibiotic that's been recommended by other chicken owners -- with no success.  The powder yes but not the stronger injectable.

I check the remaining girls every night, looking for clear eyes, listening for any sneezing. watching for head shaking.   If my diagnosis was correct, it was a bacterial infection which could have spread.

Buffy was most likely 6 or 7 years old.  She was given to me three (?) years ago and was about three at the time.  She was never very dominant and recently found the new girls accepted her company easily because she wasn't a bully about treats.  The five of them would hang together.

Her nickname was Boof and she'd come when called.  If she was the straggler coming back to the coop, when I'd start calling "Boooof" she'd respond with a quick paddle back to join the gang.

I am so sorry Boof.
Posted by Janet @ My Miniature Donkeys at 6:22 PM