Julia Child Has Me In Her Clutches 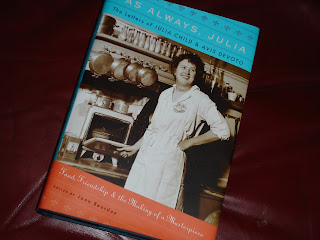 I'm in the middle of reading a book of letters between Julia Child and Avis DeVoto (a familiar name if you've watched the movie "Julie and Julia").  I recently re-watched the movie (which I love) and have read the book the movie was based on and, which, was the inspiration for this blog.  As you might suspect, for the moment, I am immersing myself in the world of Julia Child.

The letters in the book pave the way for her first book to become published.  They were written in the early 1950's (well at least that's where I am in the book right now) and include long details about cooking equipment, knives and all things culinary.  I'm on the verge of ordering this book as I'm finding her attention to detail fascinating.  Now the ironic part is, I don't usually like to cook.  And, I don't eat meat, which seems to be a huge part of her recipes.  But the sauces are appealing.  Take the mirepoix.  Now basically it's just sauteing some vegetables in butter.  But she mentions in a letter to Avis that she's freezed this sauce and whips it out to economize her cooking time.  I'm liking that angle a lot.  Then she mentions using her Waring mixer (which is actually a blender) to make this sauce.  This part is puzzling me.  But I'm game to try it.

Yes, next installment I'll return to the donkeys, but I may bring you highlights of my journey with Julia.
And yes, like you, I was crushed in both the movie and book that she did not react well to Julie's tribute to her.  But I'll forgive her that.

By the way, I'm also entranced with Michael Phelps, but that's another story.
Posted by Janet @ My Miniature Donkeys at 10:33 AM 2 comments: