We lost Emmy Lou 2 this week. 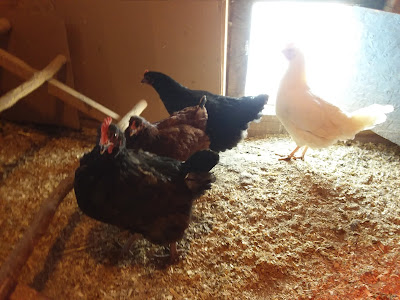 I don't even have a good photo of her, but in this image she's the middle brown girl.
She was a good little girl, although a little pushy when it came to bananas and would leap up at the bowl I was carrying.  If you recall, she was one of four hens I adopted from a farm being sold.  They did a good job of re-homing all 100 chickens with our four in the photo above.  That was in November so we've only had them seven months.

Rick found Em in a corner of the donkey pasture at the conclusion of their free range time on Tuesday.  No sign of a struggle which is odd.  I don't think that particular part of the pasture would have pointed to a hawk.  So, we'll never know what happened but I have to believe it was a predator. 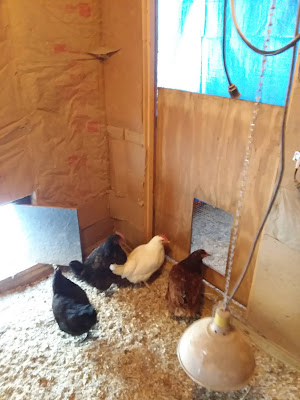 Our numbers have now dropped to eight, with Ruby Dee's death in late April.

Damn it!
Posted by Janet @ My Miniature Donkeys at 5:52 PM 4 comments:

The Carpenter At Work

Going to do a bit of bragging here.

My husband can build just about anything.  That pretty much sums it up.

He built our house, the sheds, donkey barn, chicken coop.  And the list goes on.

Most recently he added a hay manger in a nifty afternoon.  If you recall past photos of the donkey yard, a wading pool always made an appearance to throw hay and straw into.  The theory was to keep the donks from eating off the ground and consuming dirt, which can cause gut impaction.  Well, my little lovelies got in the habit of picking the hay out of the pool and throwing it on the ground.  Yup.  Thwarted again.

So while I was convalescing with my knee, Rick decided to build a manger to contain their forage. 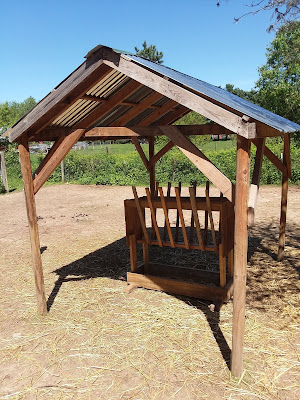 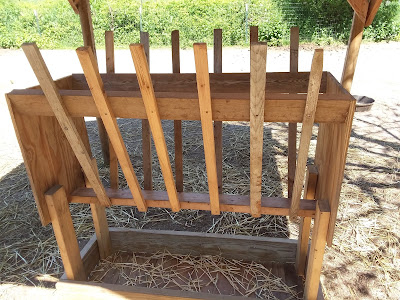 And more recently, he built a Little Free Library, upon my request.
I have had this project in mind for at least a couple of years, but for various reasons didn't act.  About three months ago I moved forward, received permission to place it in a nearby modular home community, and Rick whipped it up.  Just a week ago it was officially installed (although I am waiting for the Little Free Library plaque) and I am excited as heck. 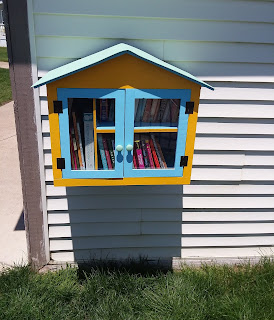 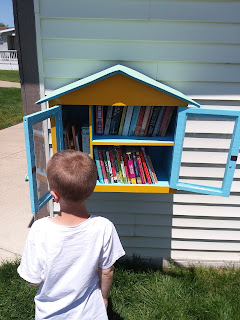 This has been a community effort in that friends have been donating books, and as a Friend of our local Library, I've been allowed to capture leftover books at the conclusion of a book sale.  I am so appreciative of people's generosity.

It's so handy to have a handy builder around.  And that's a fact.
Posted by Janet @ My Miniature Donkeys at 6:27 PM 4 comments:

OK, let's get news of the new knee out of the way.  This one was a tad slower to turn the corner and was a tad more owwie, but all is going well.  I've been out to see the donks and hens three times, although my physical therapist doesn't want me on uneven ground frequently (shhh, don't tell I went out again today).  Hopefully I'll be back with more photos soon.

In the meantime a little story about Faith, the greyhound.
Recently someone said they thought greyhounds were high energy dogs.  I had to laugh, politely. 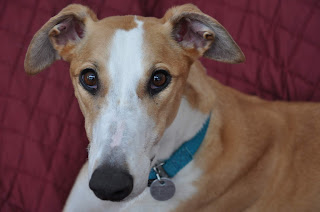 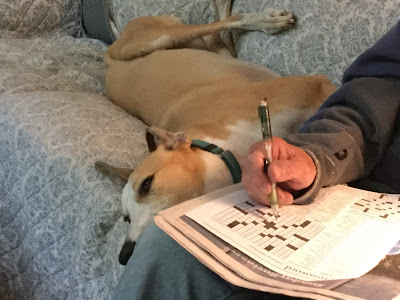 Faith in her morning nap, 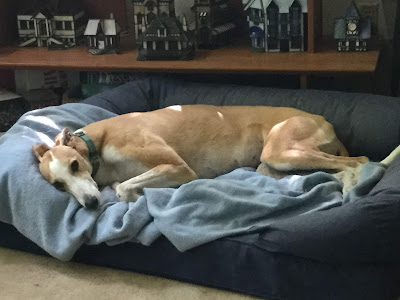 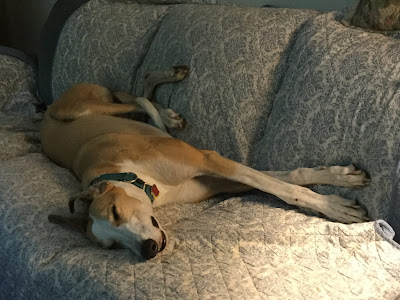 and, of course, evening nap

To be fair, these rest periods are interrupted with brief zoomies outside where she runs like the racing girl she used to be, round and round the horse trailer.  OK, now that that five minutes is out of the way, it's time to return to the house and settle onto the couch or the bed.

And that's the life of a greyhound...
Posted by Janet @ My Miniature Donkeys at 5:59 PM 4 comments: