Eat in the Snow? Phooey Say the Donks

I haven't had the heart to tell the donks about the big snow storm that's reported to be descending on us this week.  They'll moan and groan about "having to" stay in the barn with their heads peeking out the open front.  As we all know these three little donka-doos don't particularly like the snow.  Except for the lightest of snowfalls.  That is permissible. 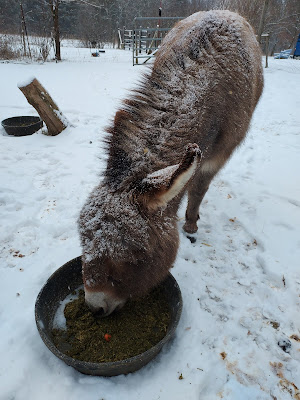 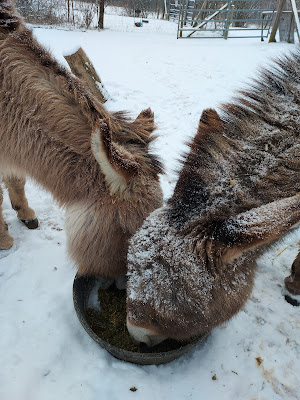 Sugar decides sharing is good (having just left her own bowl) 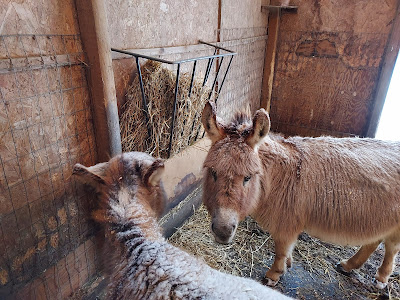 Sugar and Spice say the little dusting of snow is turning into hazardous conditions and come in the barn to finish breakfast, at which point Gabs checks all three bowls for leftovers

Usually we turn to thick, dense, hearty soups in the cold winter months.  This soup is a bit lighter for those times dense isn't calling to you.  I've actually had it for breakfast when the flavor combo just sounded right.  And it's vegan!

Posted by Janet @ My Miniature Donkeys at 6:50 PM No comments:

Last night I was late getting out to feed donks for the last meal of the day and late in locking up the hens.  Well into dusk, bordering on evening.  I had thrown hay for the donks and suddenly heard a succession of animal screams that intensified with each sound.   Clearly a fight to fend off an attacker.  I yelled "STOP IT !!" two or three times, thinking it would startle the attacker and give the victim time to run.  But it didn't work.

The donkeys stood still as statues facing the direction of the screams, and at one point, the cows next door started making a mad dash across their pasture, although it was clear the attacker was closer to me and the donks.

It was getting well into darkness, but suddenly I saw two forms run by on the other side of the donkey yard fence.  One in pursuit of the other.  To my untrained eye I'd say coyotes.  I can only assume one had caught a meal and the other wanted in on the catch.

At that point the donkeys wanted nothing to do with me.  I kept sweet talking them and finally got them calmed a bit.  But Rick said this morning they avoided him.  Not normal breakfast behavior.

The down side of living in the woods - getting to "see" nature close up and personal.

Posted by Janet @ My Miniature Donkeys at 5:37 PM 3 comments:

The three marauding chickens really got my goat this afternoon.  Good thing the season ensures neighbors' windows aren't open, because the language was flying.

I had returned home from getting some donkey supplies at Tractor Supply and grocery shopping (never a quick proposition nowadays) and had stopped at the gate to give lunch to the donks and treats to the hens.  Everything was A-OK until I headed back to the car to get to the house to unpack groceries when -- what?! -- a loose chicken.  I went round and round trying to get her (Jewel?) back in the coop, but no dice.  Just when I thought I had her in, the other two marauders escaped with one of the bantams they're turning to the dark side -- either Helen or Marigold..  At that point I threw up my hands and said fine.  Stay out in the cold cuz I'm leaving.  After grocery duty I sat down, ate a leisurely lunch and only then did I relent and go back out to try to coral them back in.  And in they came.  Contrite? -- never! 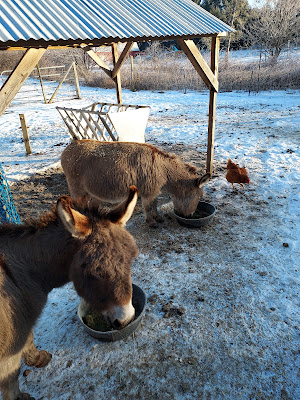 Similar to this afternoon's scene -- see the renegade just to the right of Spice?

Last week we came close to a hay aisle debaucle.

Yes, it was my fault.  I didn't lock the hay aisle latch and when I arrived for donkey lunch, the door was wide open with a donk in the aisle.  When I started yelling "OUT", whomever it was backed out and I expected to see a disaster.  But no!  Two garbage cans, one with Equine Senior which the donkeys adore and the with my chicken feed concoction, were both upright with lids on.  Yet another "what?!"  Apparently the girls aren't as good at creating a hay aisle nightmare as Luigi.  And he was the master.  I expected to find the shavings bag askew, the bag of garbage strewn, the nearest hay bale pulled asunder, rakes scattered in the yard.  Most likely I stood there in shock and disbelief. 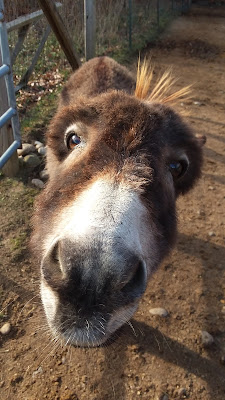 The Master
In spite of his great havoc skills, after nearly a year the boy is sorely missed.
In case you've missed the Olive and Mabel you tube series, and if you're a dog lover and would like a chuckle, here is one of many you can find.  They never fail to delight.
Olive and Mabel - The Company Meeting

Posted by Janet @ My Miniature Donkeys at 6:46 PM No comments:

A few weeks ago I instituted, on the advice of the HR department, the Donkey of the Day award.  Quite similar to Employee of the Month, but in this case the recipient receives extra butt scratches and body rubs.  Did it act as an incentive to showcase exemplary behavior.

For instance, as soon as the three donks hear the garbage lid come off the can containing Equine Senior, they rush to the hay aisle and get pretty demanding.  What you hear in the video is probably a fifth of the symphony that erupts.

Speaking of ill-behaved, the three chicken marauders take the top medal.  In case you haven't guessed, yes it's the three young girls.  They are into mischief constantly, steal all treats -- in fact sometimes I lock them out of the coop for a few minutes so the older and reticent girls get a chance -- and are under my feet constantly.  And you know Violet is the worse offender. 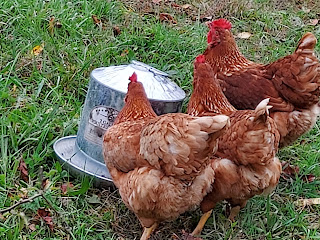 Prior to winter the three were manageable but now that free range time is at a premium, they test my patience on a daily basis.
In times of calm, though, all is right with the world

Posted by Janet @ My Miniature Donkeys at 6:41 PM 2 comments:

View From My Window

Facebook users may be familiar with the international group "View From My Window".  You might want to take a look - views as varied as the grandeur of an Alaskan landscape to that of a brick wall.  All over the world.

I thought I'd do a mini version for you here. 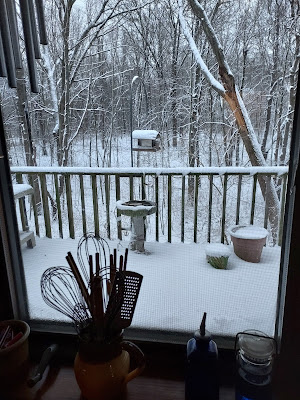 From the kitchen window, a view of the birds and squirrels eating and drinking

There's another bird feeder further down the deck and a squirrel feeder, but this is the view most seen. 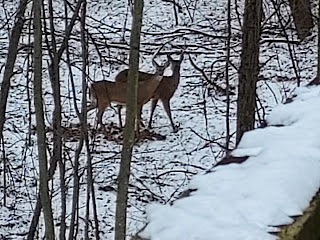 Same window, a view of these two lovelies
I was trying to remain quite still
This is actually a cheater picture - not from the window but a few yards up the driveway.  But it's one of my favorites after a snowfall.. 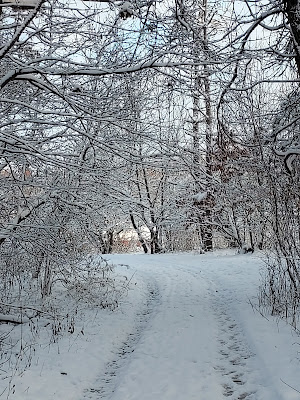 Speaking of snow, two of the donks tried to duplicate the original snowy faces photo from quite a few years ago with the three amigos. (see photo on right of home page, fourth down) 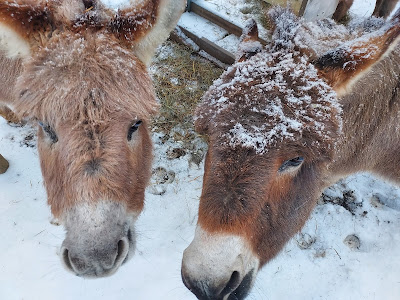 They gave it a good try but it doesn't have that certain something of the original.
Finally, I experimented with the DIY coconut oil "suet" for the clucks. 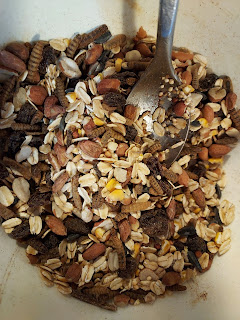 One half cup each of organic oats, raisins, peanuts, Grubblies and a bit of cinnamon. 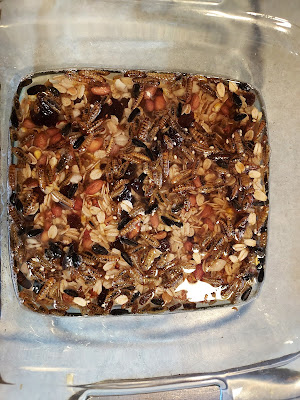 the dry mixture mixed with the melted coconut oil in an 8x8 pan
After cutting the solid suet into quarters I did have a bit of a problem getting the squares out intact.  The best of the lot was put in the suet holder hanging in the chicken porch.  Since I had much of the loose mixture left they've been getting that as a treat too.
And finally to make you smile, here is the wrapping paper I found at Tractor Supply.
Perfect! 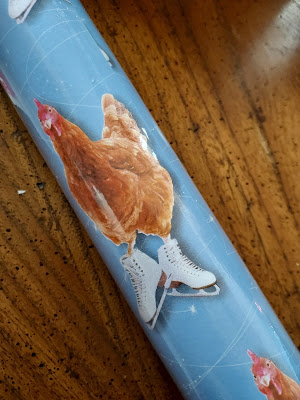 Posted by Janet @ My Miniature Donkeys at 6:49 PM 3 comments: