Mornings with Donkeys and Chickens

Summer mornings are probably my favorite time with the critters.  The sun is shining, there's a slight breeze, the day is quiet. 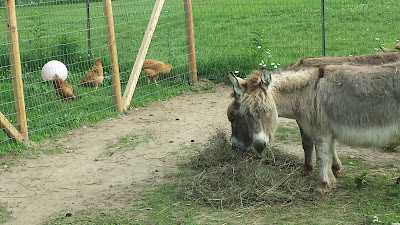 Two flakes thrown for the donkeys and they're softly munching. 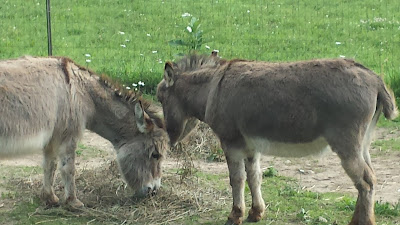 Chicken coop door opened and the girls happily launch out into the green grass. 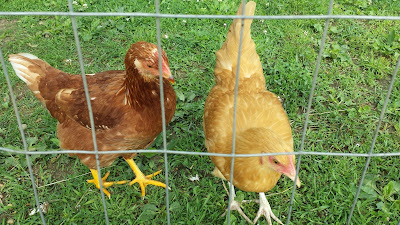 Everyone is peaceful and happy.
Life is good.
Posted by Janet @ My Miniature Donkeys at 9:48 AM 1 comment:

Before I pull out photos of my sweet girls, with whom I am smitten, let me attend to a couple of "unfinished business" matters.

I've received questions asking about the effectiveness of the Bug Pellent featured in the last post.
I'm giving it a thumbs up at this point.  The flies were fairly thick today around little donkey legs, but as soon as I stepped into the donkey shed -- whoosh, no flies.

And, I need to bring you up-to-speed on the BLM donks.  Local friends have been inquiring.
After I had agreed to take two jennys, some complications arose which were deal breakers for me.  I had had several conversations with Fran at Crossroads Donkey Rescue, here in Michigan, and she said she could take the two I had committed to.  The plan is for me to adopt one of her domestics.  I have my eye on a mini jenny, Alice, but the farm she's residing at is under quarantine for the equine flu.  Right now I'm just waiting for the quarantine period to close.

Now, on to the chickens.

Here are the four girls. 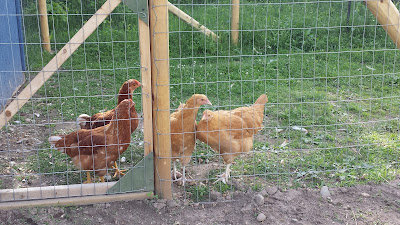 I'm fascinated with the changes in their physical maturation and their sweet personalities. 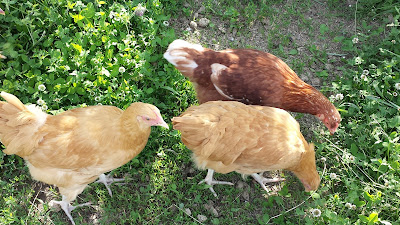 Thus far I have learned they don't like lettuce or brussel sprouts, but are enamored with banana and Cashew Clusters from Costco (I had an old, stale, and sticky bag that I tested on chickens and donkeys).  Only small amounts of the sweet stuff -- of course.

I love talking to them and they often will stand right below me and peer up, hanging on every word.
I'm certain Ruby Dee knows her name.

Most people I've met don't want to be burdened with pets when they retire, but I have to tell you, I am loving it.  Going out in the mornings to tend to donks and the girls, and at dusk talking to everyone as I lock the girls up for the night, what a joy.

Posted by Janet @ My Miniature Donkeys at 7:58 PM 2 comments: