Its time to face the facts.  Fall is well underway and I cannot stop the progression to winter.
Darn!

The leaves are falling, carpeting our patch of woods. 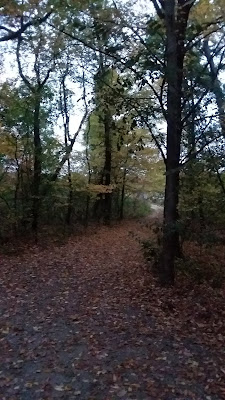 The mums are radiant. 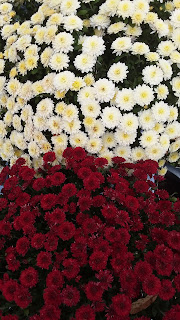 But its time to prep the teeny tiny farm for winter.  Fans have been stored, the pasture is now off limits to donks, and with the advent of chilly nights, bedding is lush. 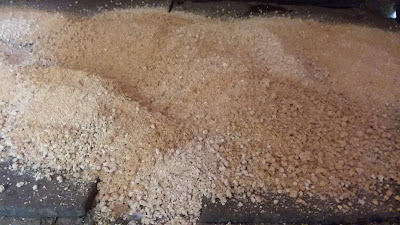 OK, maybe it doesn't look quite lush in this photo, but after it's been smoothed out, the donkeys settle right in.  I explained to readers last winter, after 10 years of using pine shavings, the beasts started eating them.  The donks did not offer a logical explanation for this crazy behavior.  These are hydrated shavings which, yup, require water.  Difficult if you're in the dead of a Michigan winter and looking at sub-zero temps.  But, for the moment, that's the logical option.
The porch off the chicken coop is getting bulked up with straw providing an insulated area to get some fresh air when snow is on the ground.  Haven't put the radiant heater in the coop yet.  Yes, I've read many articles on the pros and cons of using a heater.  I am waiting a bit longer this year to give the girls some extra overnight warmth to allow them to acclimate to the temps.  But when it starts getting really really chilly, it will be turned on. 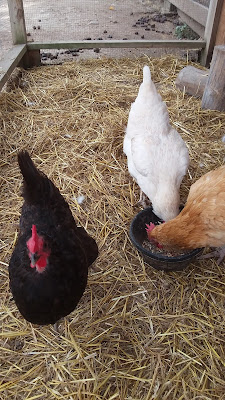 Fall means a ready supply of carrots for the donks and pumpkin for the hens. 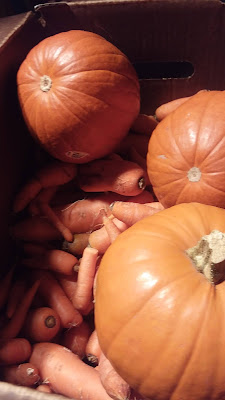 Winter coats on the donks are coming in nicely. 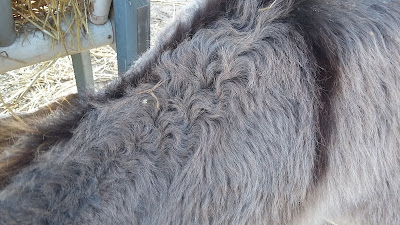 Spice has nice waves, without the burden of a perm!
Thankfully we haven't quite bottomed out at night to warrant turning off the water supply to the trough, which will then necessitate hauling water.  That's my time to moan and groan. 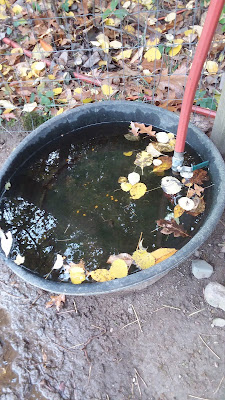 What's fall bringing to your neck of the woods?

Posted by Janet @ My Miniature Donkeys at 7:02 PM 3 comments:

Yesterday morning I went through the typical daily routine to feed donks and hens.  First hay for the equine hooligans, just to get them out of the way.  Then the chickens.

I opened the coop door from the donkey barn and the girls always come tumbling out talking up a storm.  No hens.  I heard talking but they weren't flying out the door.  I probably stood there a moment trying to figure out what was going on.  As I went further into the coop, I saw all the girls in the other "bedroom" of the coop, clustered together jabbering away.  My confusion grew.

My first thought was someone had died.  I quickly scanned the area.  No body.

What the heck is going on.

I decided as I had no idea why they were behaving so oddly, but no one appeared hurt, I would start clean-up chores. Moments later I stopped in my tracks.  Yup, guess what I saw coming out of the corner.  A little black and white friend. 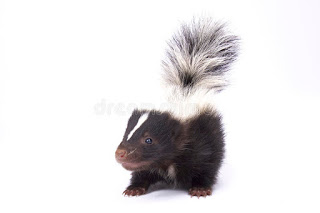 I stood stock still just waiting probably holding my breath.  He/she slowly crawled through a hole and out into the barn. 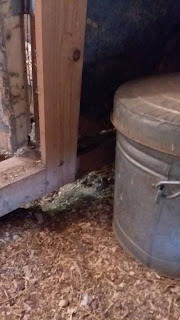 Right behind the can you can see daylight at the bottom.  Darn!

I take pride in the fact our coop is so critter-proof.  Wrong!  I called Rick from the coop immediately and in a bit he rectified the problem with some hardware cloth.

I gotta tell you, that incident sure got my heart beating a bit faster.  And I am so glad it was s skunk who found our entry point and not a racoon.

* * * * *
And now, on a completely different topic, I'm showing off a gift I received from knitting friend extraordinaire, Mary.  Gorgeous socks made out of bamboo and cotton. 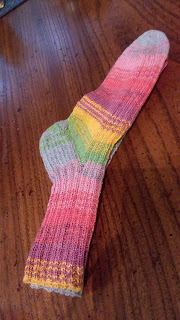 She knows I am partial to vibrant colors and picked the yarn to suit.
Jealous, aren't you.

Posted by Janet @ My Miniature Donkeys at 6:49 PM 3 comments:

Bad news comes in threes.  Or so they say.

I received the third notice this morning of an equine buddy passing from this world.
Let me introduce you to all three.

My last (and final) horse, Natural, lived at a nearby horse ranch for 23 years (he was 30 when he died).  For most of the time he was there, the ranch included 98 acres of rolling hills and woods.  A perfect spot for a horse to be a horse.  For a time, Natural was the head honcho of the 50+ herd.  He could part the waters with a look.  But as he aged he lost that role.  Thankfully he kept his best buds. 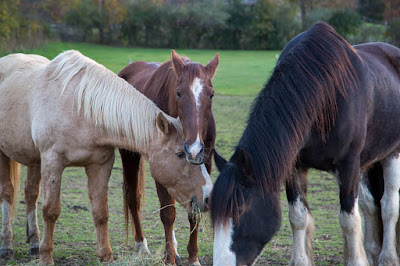 Justin, Natural, and Apollo
Justin was always a big moocher for treats.  If I brought them for Natural, it was mandatory to share with Justin, just to get him to leave me alone.

A clear memory of these two boys was their fight over a mare, Crystal.  I had never seen two geldings rearing and pawing at each other over a mare before and it was scary.  And after that duel, they were best friends -- the three of them.
Justin died September 9.
And then there was big boy Apollo.  Truly a gentle giant.  He too was a big mooch.  He could stealthily creep up behind you and suddenly you'd turn and encounter a big head asking for treats.
I heard this part weekend, Apollo had to be put down.
This morning, was the third.
Sweet Dolly lived next door for a time. A lovely white Percheron, she also enjoyed those carrot treats  I'd throw over the fence to the group next door.  But she'd come up to the fence with those big lips and demand to be fed by hand.  How could I refuse. 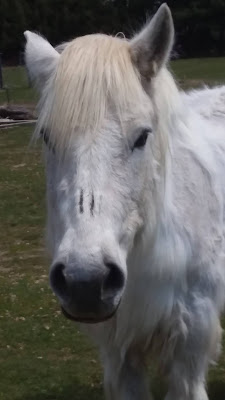 So, it's the end of an era.
Natural has been gone for almost six years and now his best buddies are gone too.
Hopefully they're happy grazing and getting carrot treats somewhere else.
Have fun boys.  You too sweet Dolly.
Posted by Janet @ My Miniature Donkeys at 6:50 PM 2 comments: