I'm probably repeating myself (I'm certain you're used to that by now) but my little chicken clucks have an abundance of personality.  I wish you could have seen Emmy Lou the other morning.  Even if I had had a camera handy, it wouldn't have captured the moment.  Or, maybe I'm just enamored with the girls and find their behavior charming.

On a recent morning the girls were helping with manure clean-up, as usual, when Emmy Lou hopped onto the wheelbarrow handle and took in a view of the world from a new vantage point.  Didn't quite suit her so she hopped into the wheelbarrow proper, pretty full with donkey nuggets.  I asked her if she realized what she was standing in.  Nary a word did she reply, but seemed pretty content to survey the donkey yard from there.  Finally it was time to move the wheelbarrow and I asked if she'd like a ride. At that point she ended the conversation and hopped down.  Yes, I found this highly amusing.  I guess it's me.


Then there's Ruby Dee (with Sweet Pea and Emmy Lou in the background). 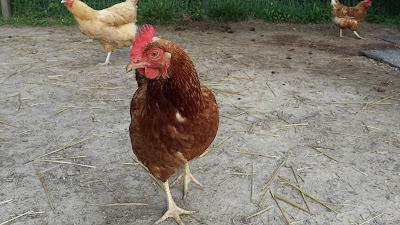 The little devil likes to take pot shots at my feet in the mornings.  In the summer I always wear my barn sandals unless it's wet out.  Barns sandals are footwear past their prime.  But still perfectly wearable.  And comfy. 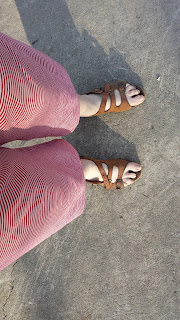 Sandals equal exposed feet.  You see where this is heading, right.
The little girl will come running over and give me a nice little peck on the foot.  Nothing too damaging but it's not pleasant.  Again, I ask, how does one chastise a chicken!  I've tried verbal lecturing, pushing her gently but firmly to the ground (which I've been told is a submissive posture) and a couple of times I've given her a little smack.  She's cagey about it too.  I'll think she's about to pounce, give her fair warning not to, then she'll wait a couple of minutes and get the last laugh.


Most mornings Buffy prefers the exotic water of the donkey trough.  It's so much more refreshing than lousy chicken water. 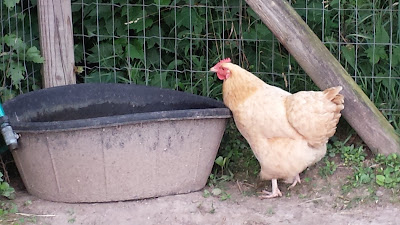 And I have finally found my way into Buffy's heart -- with blueberries and grapes.  Instead of the "stinking banana" (her words, not mine) that I've been providing each morning, and the other girls adore. 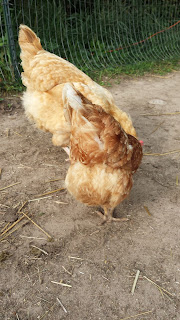 In the world of chickens, there is always something interesting to investigate.
Perhaps we should adopt their philosophy.
Posted by Janet @ My Miniature Donkeys at 12:28 PM 8 comments:

It's been a heck of a week.
One of my whacked out knees got even more whacked out and I've been babying it with ice, rest, a knee brace, more ice, anti-inflamatories, more rest.
Finally I see some progress.

Rick has been mostly tending to the donks and clucks, except in the mornings.  I refused to relinquish that lovely time of day; it's my favorite time to commune with the bunch.  Feeding, spraying fly repellent, even cleaning up manure with more than enough help from the chickens.  Its all good.

As a result of all this inaction I must rely on a small story I've wanted to relay for a couple of weeks now.
Dear Alice.

I've mentioned before that she gets soaked beet pulp in the  mornings.  When we first started this routine, and for a few weeks, I had to trek over, interrupt her breakfast of hay,  throw a lead line over her neck and coerce her to come to the shed for her "treat".  Then, it got so I could just call her and after five or six repeats of "Alice, Alice-badallas", she'd saunter over to the shed.

Now, dear Alice, tells me when its time for beet pulp and oh yes, let's me know she's ready.  Sometimes its understated and she'll just hang out in the shed staring at the bowl and sometimes it's a little more vocal reminder.  "Where is it!"  And when she sounds the call, I'm well trained, stop what I'm doing and get her beet pulp. 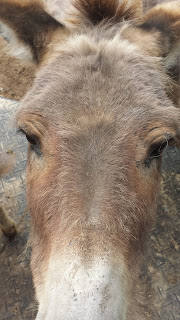 The back story:
I was riding my bike in the "neighborhood" and when I returned noticed the chickens had been locked up in their small outside pen.
That's odd.
When I left they were in the donkey pasture, with the donks.

Then I turned to manure duty.
Rick came out to the gate and explained that while I was gone, he heard the chickens in a ruckus and found Golda back in the corner by the fence.
No idea what predator would have been out in the middle of the afternoon.  It would have had to jump the fence - front gate was blocked off so hens couldn't escape.


I will miss the little girl.
She was my carry-around while chatting buddy.
Good-bye sweet Golda. 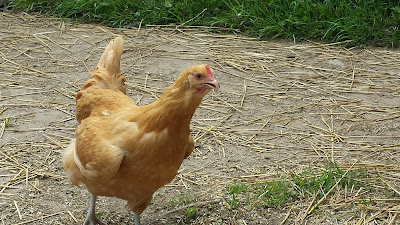 Posted by Janet @ My Miniature Donkeys at 5:56 PM 5 comments: