We got hit by about 12 inches of snow on Wednesday.  Here in southeast Michigan.  Right about here. 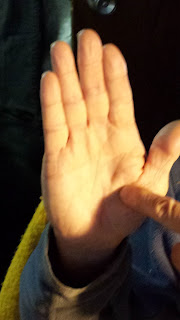 We had escaped a lot of cold temps and heavy snow.  Until Wednesday. 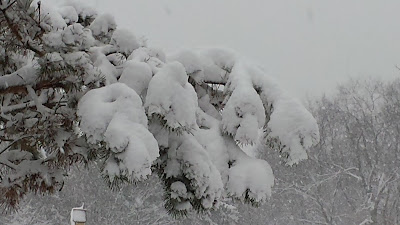 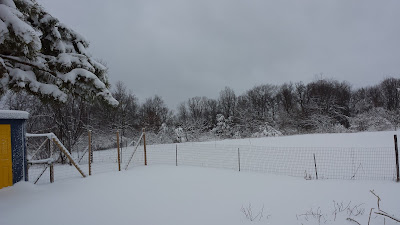 Thursday morning it was time to get to work.  Shoveling a path to the water. 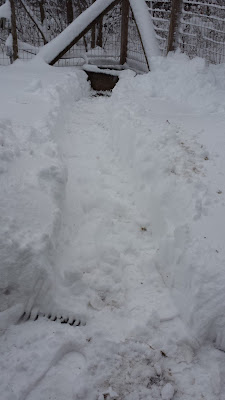 And a path to get the manure wheelbarrow in, which also gave the donks a little walkin' around room.

When we built the chicken coop, we had just such weather in mind.  I didn't want to be wading in big drifts to get to the donks in one place and the hens in another.  So we put the chicken coop just off the back of the donkey shed.  In the photo below, you're looking through the donkey shed to the open door of the coop, and can see their little open door on the far wall. 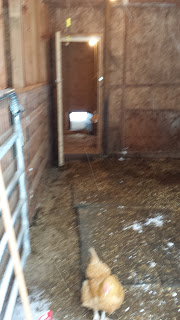 Eventually all paths got shoveled, all critters were fed and I toddled back to the house. 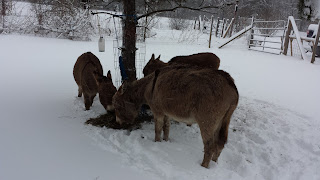 And today, five days later, it's 50 and turning into a muddy mess.  Ha!

Posted by Janet @ My Miniature Donkeys at 5:06 PM 5 comments:

Found Me a "New" Donkey Vet 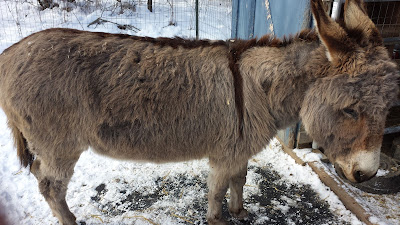 I believed our newest rescue, Alice, was not doing well last week and went into a bit of a tizzy. Partly because I'm NOT tickled pink with my equine vet.  I won't go into particulars but I chose him because he has donkey expertise.  His style is not sitting well with me though.  Today I spoke with the equine vet who helped me through the last months of my horse Natural's downhill slide in 2014.  I liked her open-minded philosophy, her kind manner and her generosity of communication.  But I didn't know if she had donkey know-how.  Turns out she owns a miniature donkey!  I feel like a burden has been lifted in my quest to make Alice more comfortable. I will definitely be calling her when next Alice's "issues" are beyond my ken.  Whew!

Alice perked up after a couple of modifications, although I a little stumped as to what did the trick. 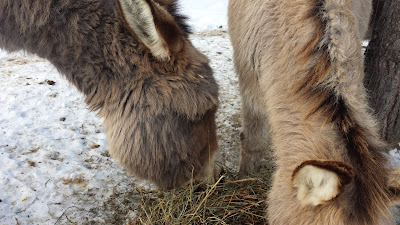 (sweet Alice on the left)

I want to give a huge thank you to fellow blogger The Dancing Donkey.  Quite a while back we were in contact with each other about teaching donks to drive (a cart).  And we had exchanged email addresses.  I recently contacted her with some of my concerns about little Alice and was given lots of suggestions, articles, and good info.  Thank you, thank you Kris.

And, while I thanking people, I'd like to include Fran of Crossroads Donkey Rescue.  I know she's always available when I need to bounce a donkey question off someone's ear.

Yes, donkeys are different than horses, in many ways.  They may all be equines, but the differences come up again and again.  I'm still learning.
Posted by Janet @ My Miniature Donkeys at 5:46 PM 6 comments:

Before I regale you with the newest episode in "life with chickens...and donkeys" let me say I was tickled pink to hear from readers new to me.  Perhaps not new to the blog, but new to comment responses.  I so appreciate your feedback, even if its just to say hi.  So thank you!

Now on to the story.

Although we only have four chickens -- pop quiz, do you know all four names?? -- I sell what eggs we cannot consume to pay for their feed.  Self-sustaining chickens.  Now if only the donks would pull their weight.  Sigh...

The girls are fed only organic feed.  This choice really sprang from my desire to put uncontaminated eggs into our bodies, but now that the girls are part of the family (at least in my eyes) I want them to be healthy too.  I sell the eggs for $3 per dozen.  I've been told that's unreasonably cheap and that I should up the ante.  But, I'm not convinced the market here would bear a significant hike in price. We decided to get a better factual fix on whether the current price is actually covering the cost of feed. 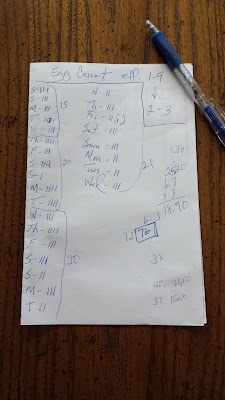 If you can make sense of it, you can see that from January 9 through February 3 the clucks produced 76 eggs.  We kept count through one bag of feed.  Now, of course, sizes of feed bags vary and this was a smaller poundage.  But it still gives us a starting point.

The long and short of it is, I think we're covering costs right now. 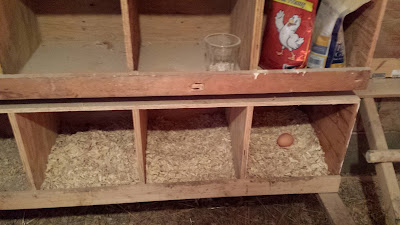 The girls are about one year old this month so this has been our first winter with them.  Production has dropped significantly from the summer and fall; our chart tells us we were averaging 3 eggs per day.  Some days there'd be 2, sometimes 5.  In the summer we could count on 4 a day.

We were darn serious about our counting.  We'd remind each other to write down the all important slash marks for the day. 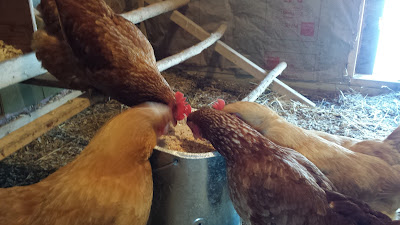 And four clucks were oblivious to our efforts, instead concentrating on treats.  And that's as it should be.

Quiz answers:  Ruby Dee, Golda, Sweet Pea and Emmy Lou.  Hope you all got an "A".  It will be going on your permanent record.
Posted by Janet @ My Miniature Donkeys at 3:27 PM 5 comments:

Let's assume you don't want donkeys in the chicken coop and you don't want chickens eating donkey oats.  You've got to get your timing down pat.  I have now figured out the optimal sequence of events for our small crew.

Step 1 upon marching into the donkey yard (or sliding in depending upon the ice conditions), throw hay immediately. 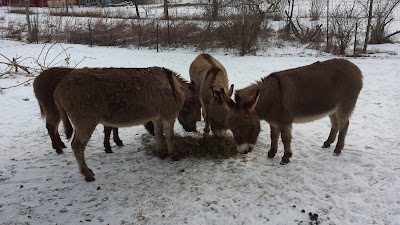 Get those four hyenas munching away so they don't get the idea to wander into the chicken coop while the door is open.

Step 2 -- open the chicken coop to let four crazy clucks out.  And then clean up the mess.  They are now consistently pooping on top of the nesting boxes.  I finally figured out laying out a clean paper towel makes clean-up easy. 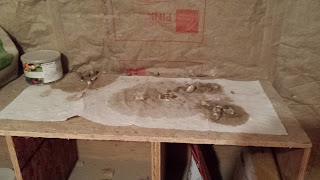 Open their small door, unplug the heat lamp, collect eggs, yup that's the drill.
All while the clucks are wandering around. 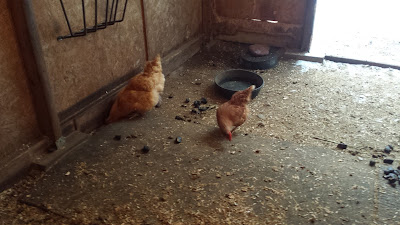 I think I've mentioned that the chickens don't care for snow so they haven't had as much free range time during the day as they were used to. So they get some roaming time while the boss lady cleans up after the pooping hyenas. 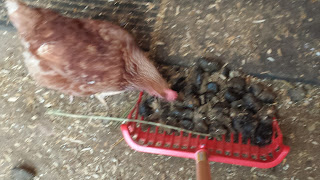 Oh yea, the clucks are big helpers, by the way.
The words, "Watch out, I'm going to step on you" can be heard every morning in the donkey barn.

Step 3 -- Now the donkey barn is clean, chickens have had time to roam, it's time to get them in the coop, so Alice can get her oats.  Otherwise, the chickens descend upon her bowl and she doesn't stand a chance.  What do I use to lure them in -- their morning banana, of course. 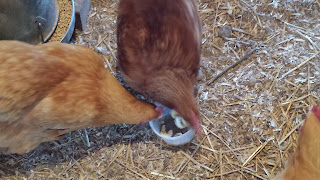 If I call "girls" in a certain tone of voice, they know it's treat time and in the mornings they have come to expect their banana.  (this morning we were out, so I substituted blueberries -- Ruby Dee said "what?!").  Can you say s-p-o-i-l-e-d.  In the photo above you can see them dive bombing the bowl to grab each precious morsel. 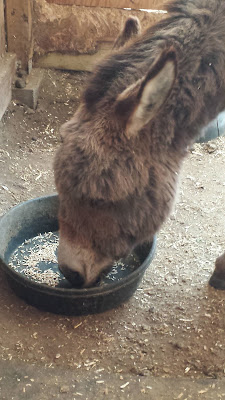 Did I mention, I need to have the hay thrown out of sight so the other donkeys don't get too intrigued with what's going on in the barn and barge in on the Alice girl.  The other three DON'T need more calories.

And now it's time to gather up eggs, the oat bowl and head back to the house.
Eyeshadow and May (next door neighbors) check to see if they can have more carrots and I must remind them, no we already did that. 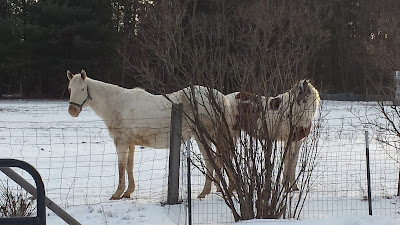