If you recall, dear readers, I started a milk can table project earlier this summer (see post of 7/6/14). 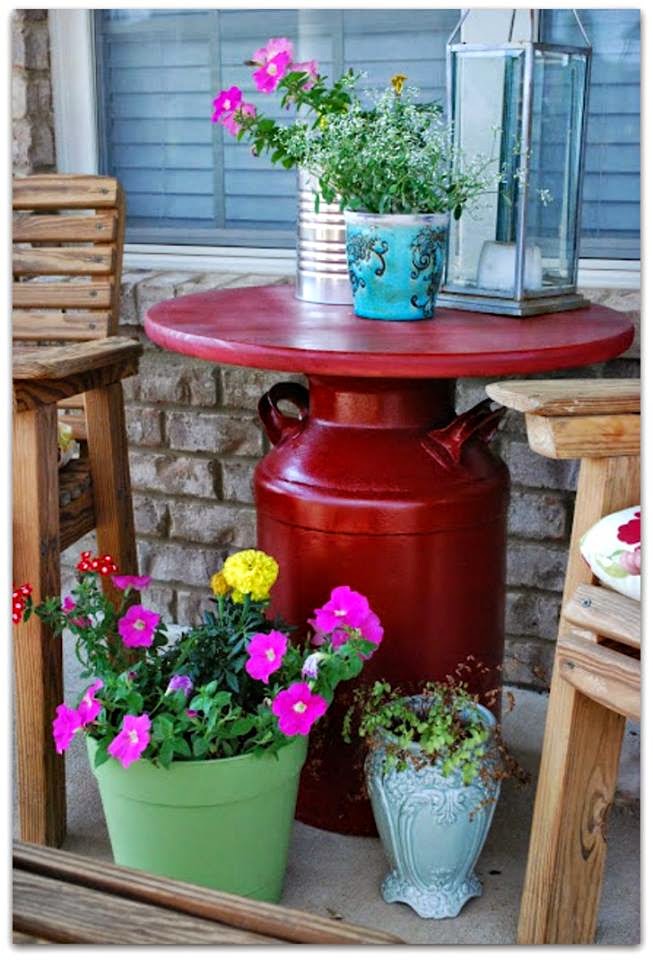 This was the look I was trying to duplicate.


After I painted the donated milk can (from dear friend Bev) it was Rick's task to try to figure out where to purchase an already cut piece of wood. After all he is a carpenter.  Well, the project got bogged down at that point.  Rick was striking out finding something affordable and of the right size.  He told me of some at Lowe's but felt the largest option was too small.  He kept looking.

Other life events came along (like retiring!) and the milk can table stayed on the back burner.

We host an annual bocce party and lo-and-behold a couple of days prior to the party (during the bustle of cleaning the house) Rick appears with a completed table.  Shockeroo! 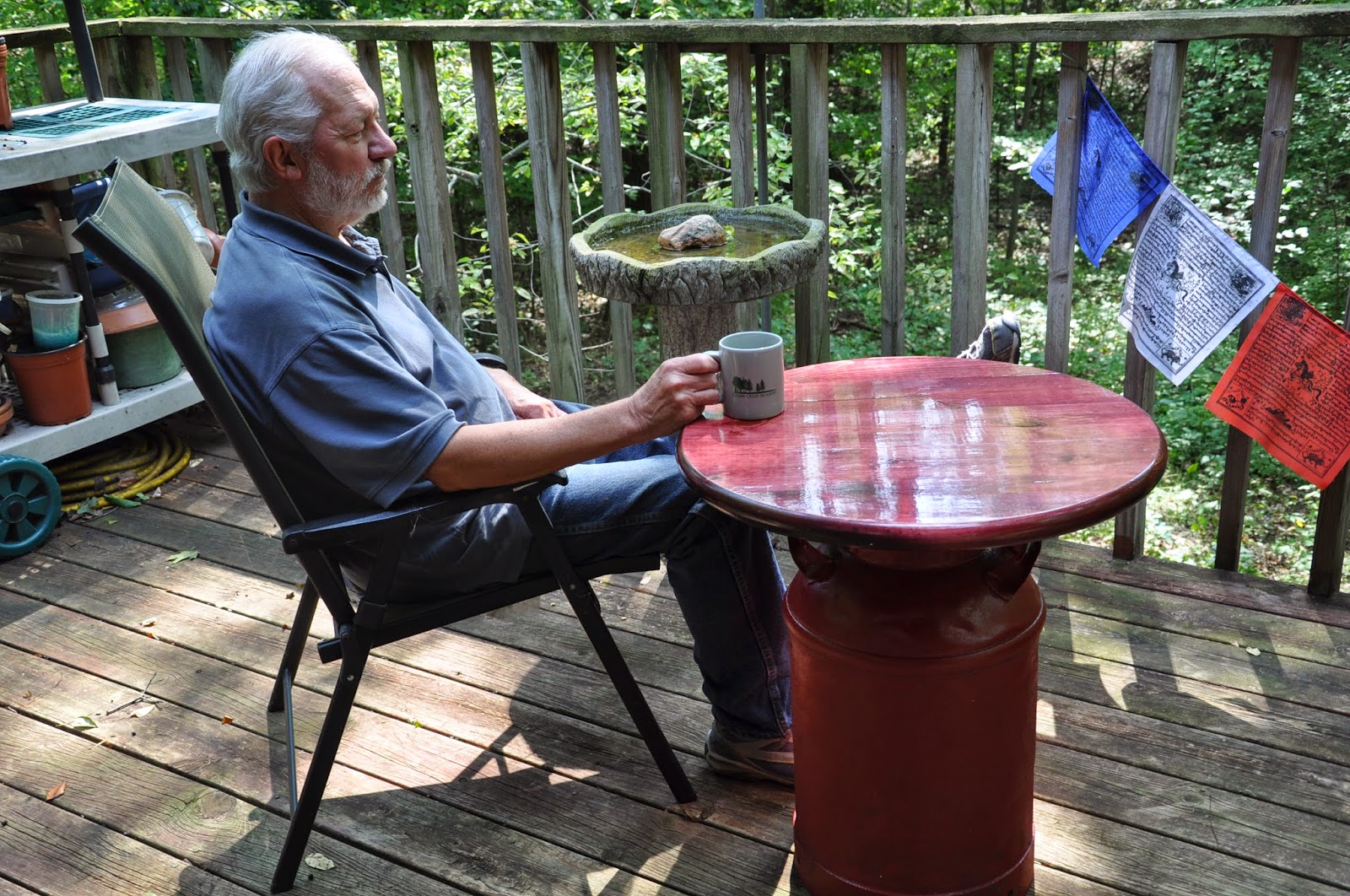 He ended up using the largest piece available at Lowe's, stained it red with lots and lots of polyurethane on top of the stain.  For a split second I was silent as I had envisioned painting the top to match the can.  But as I continued to look, I realized he had chosen the right finish. 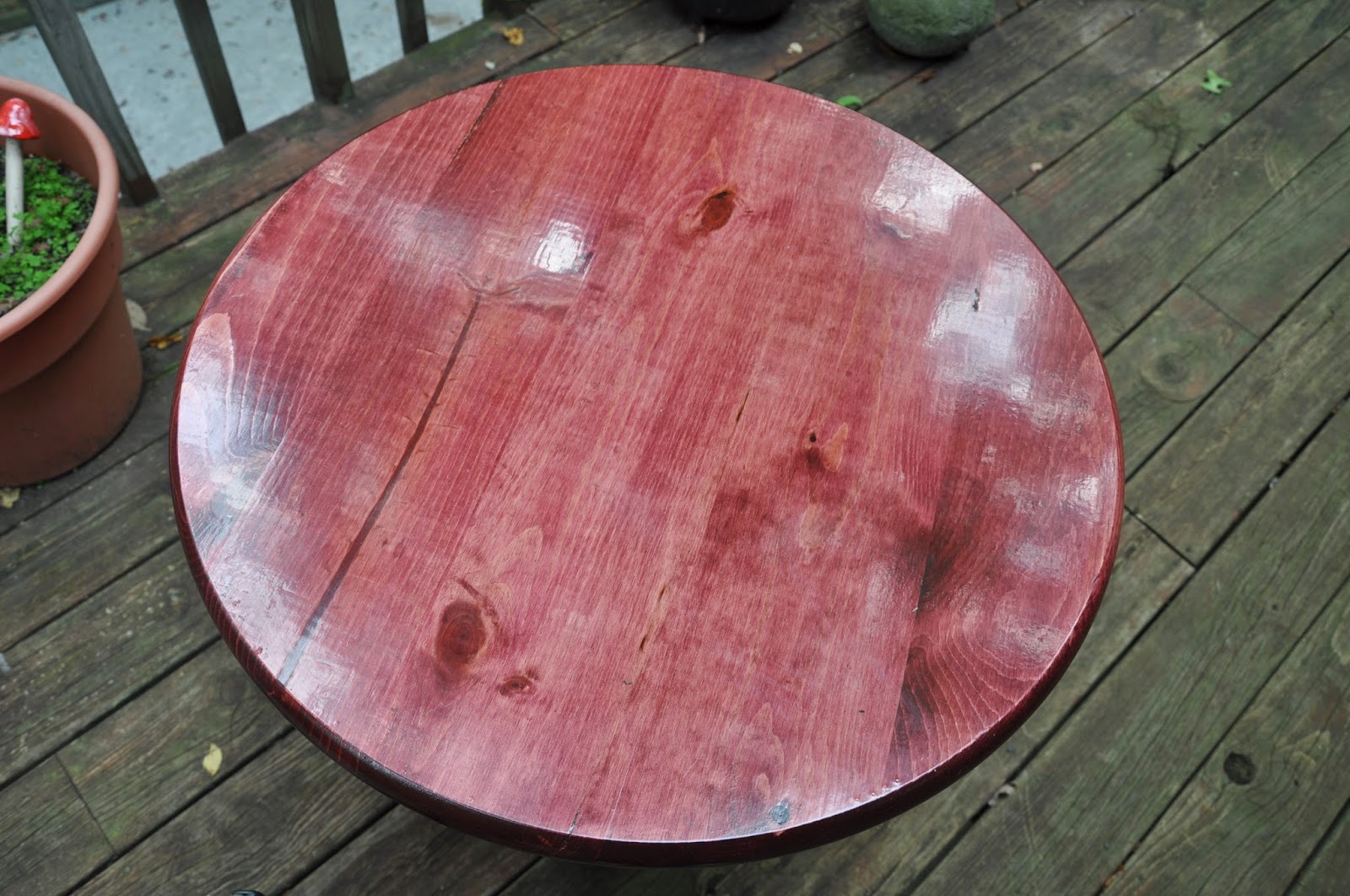 The grain of the wood is set off so well with that red glow.


And of course two dogs have to inspect as well. 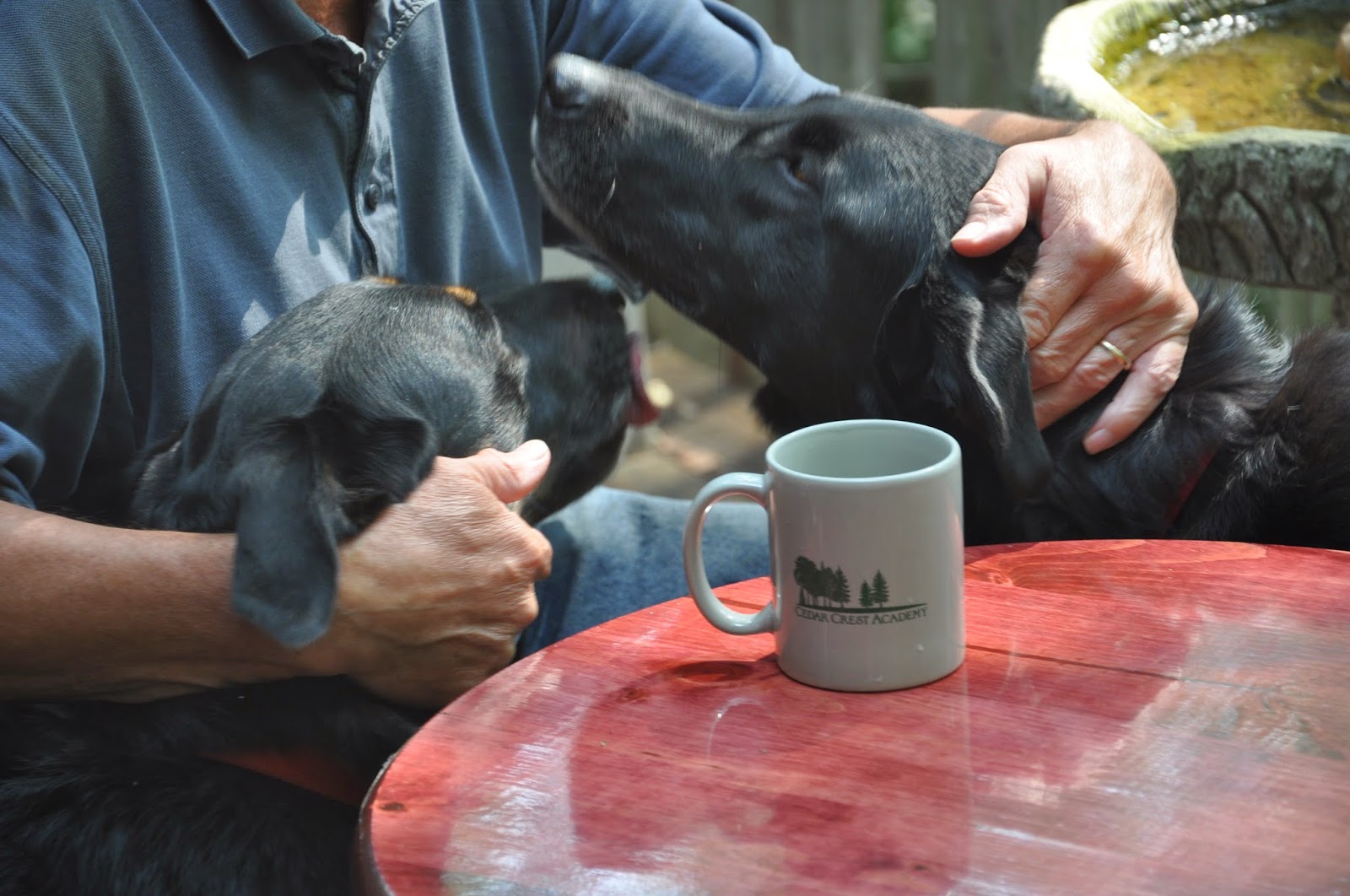 Its that time of year.   #2 carrots (I guess you could call them rejects) are ready to be scooped up at the Farmer's Market.  I go as often as I can to score a hit for donkeys and for us -- grocery story versions don't come close in sweetness. 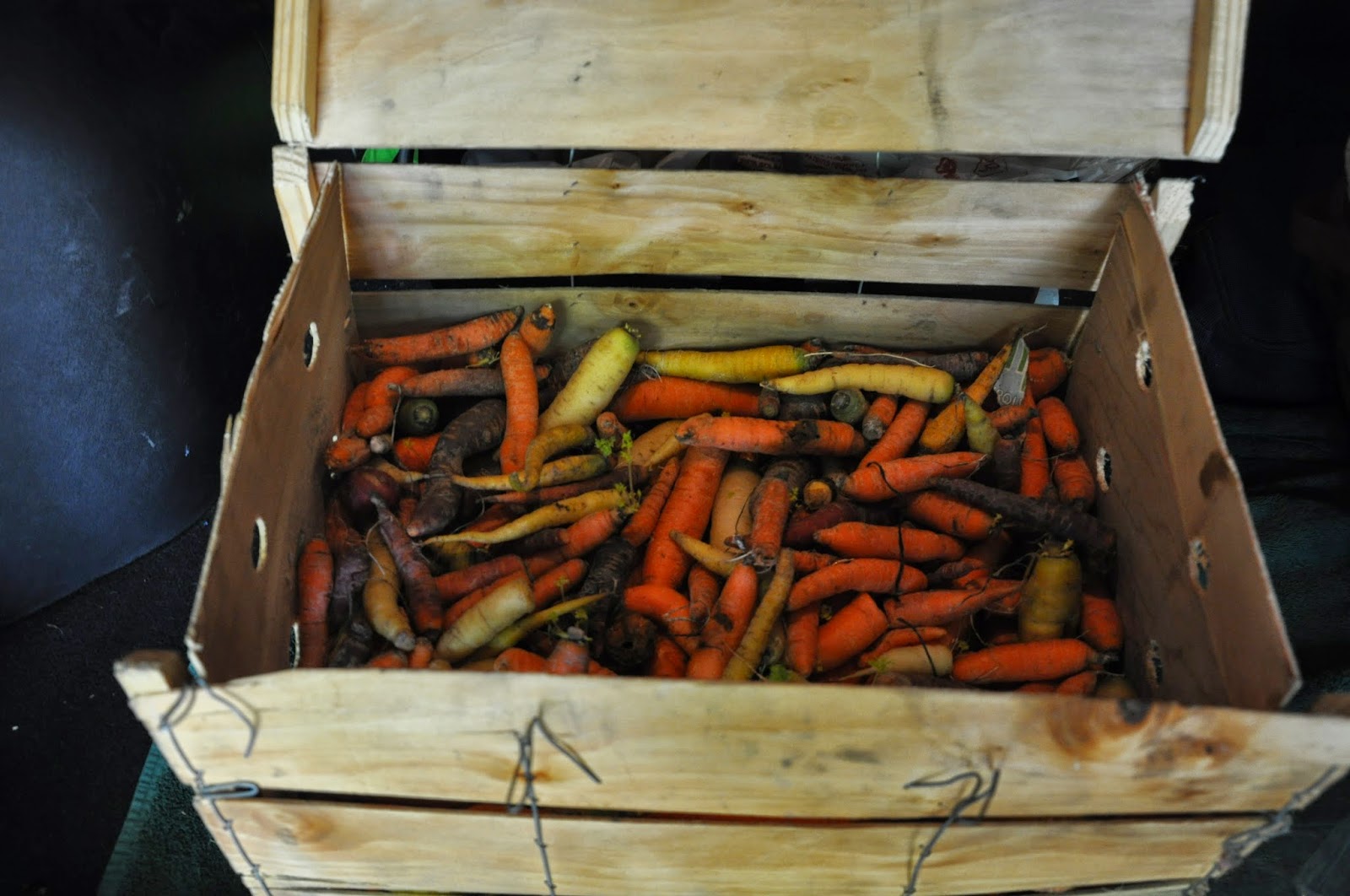 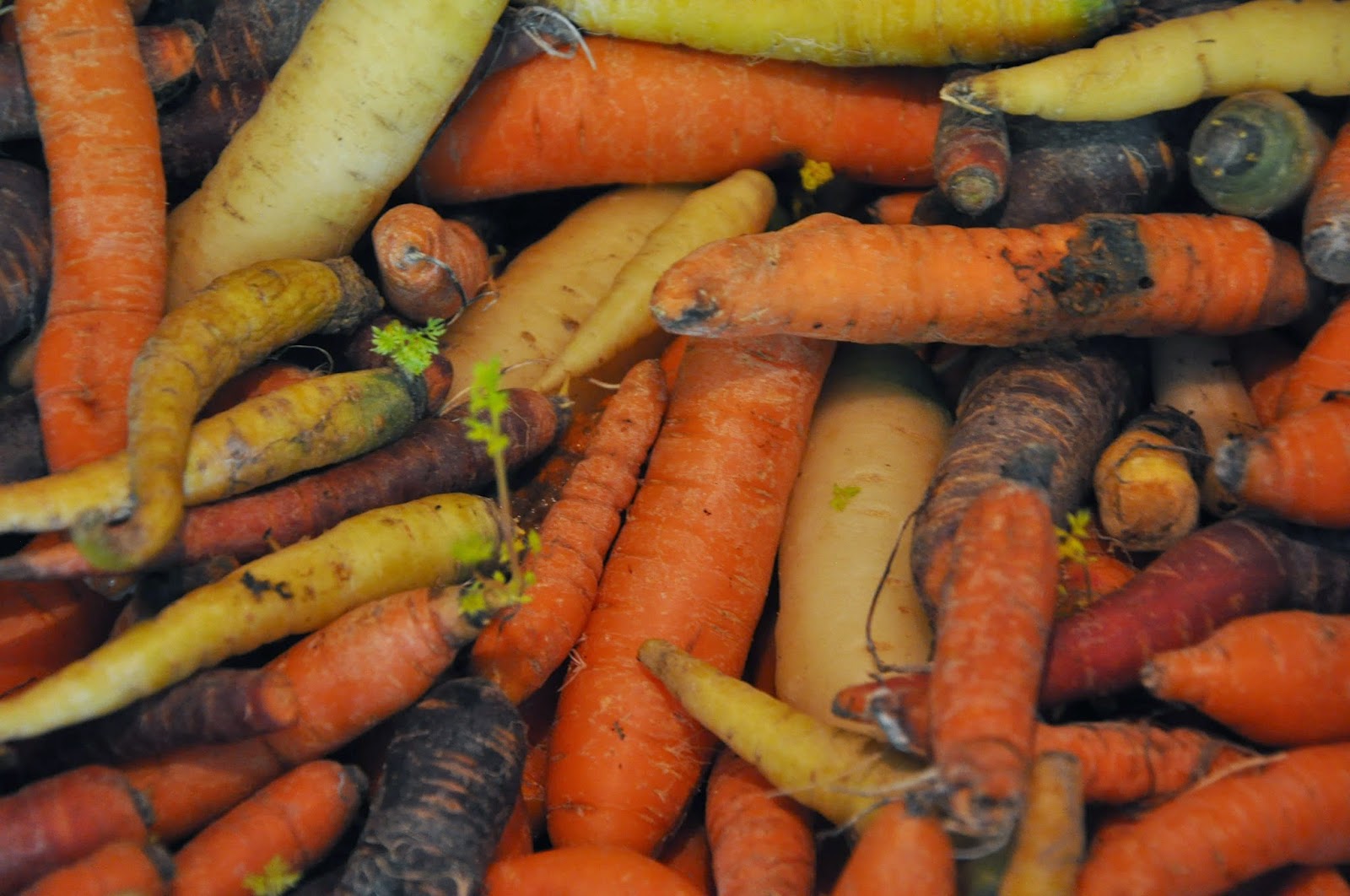 The crate is secured in my car trunk -- I've left carrots (in a crate and a bucket WITH a lid) in the garage and invariably either dogs get into them or donks do on one of their walkabouts.

The farmer always tops them off for me so you can see donkeys, Natural and horses next door have been enjoying them.  And of course the dogs.  They can hear me cutting up carrots from a mile away and race to my side in the kitchen.  And when I'm handing out sweet treats to three donks, dogs raise their voices in protest until I share. 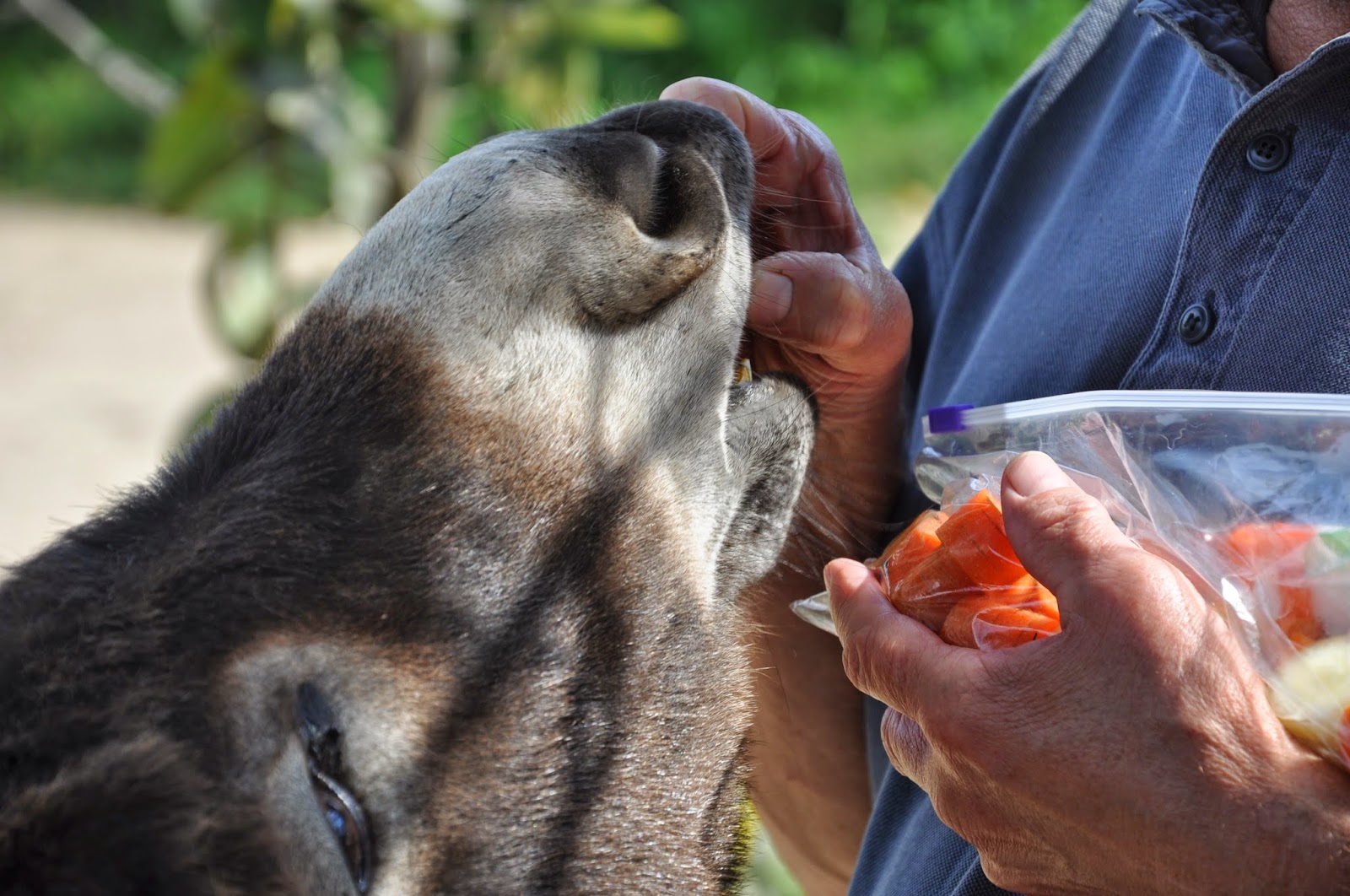 Oh my, croons Luigi, they're so so good. 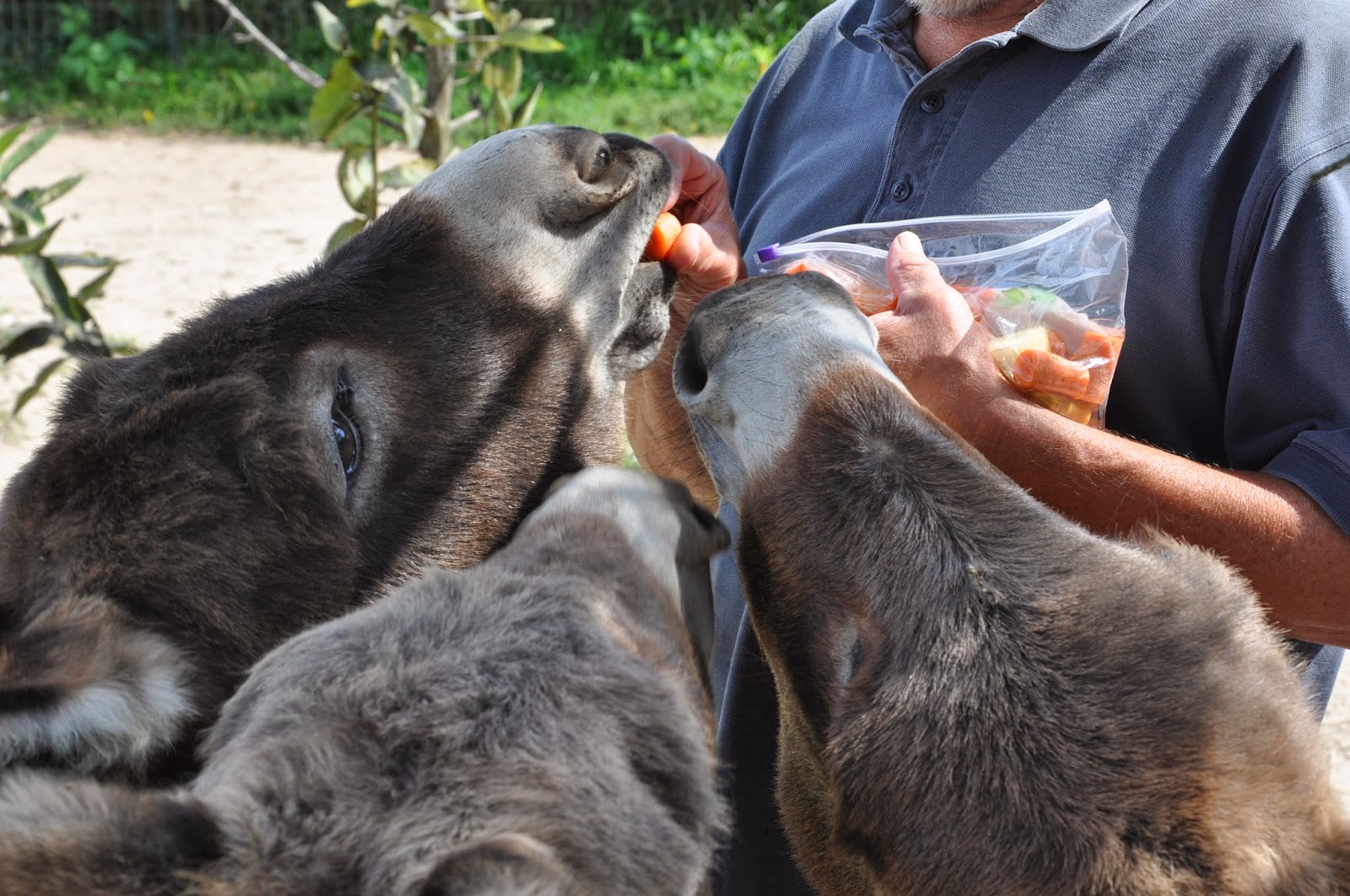 Scenes from the horse farm

Some days when I'm visiting Natural (the best horse in the world), I am determined to snap portraits of my boy, who is on the decline.  And some days I don't want to be encumbered with the photography burden.  Just carrots and hugs.

Well, a few days ago I was in the photo mood and here you have it. 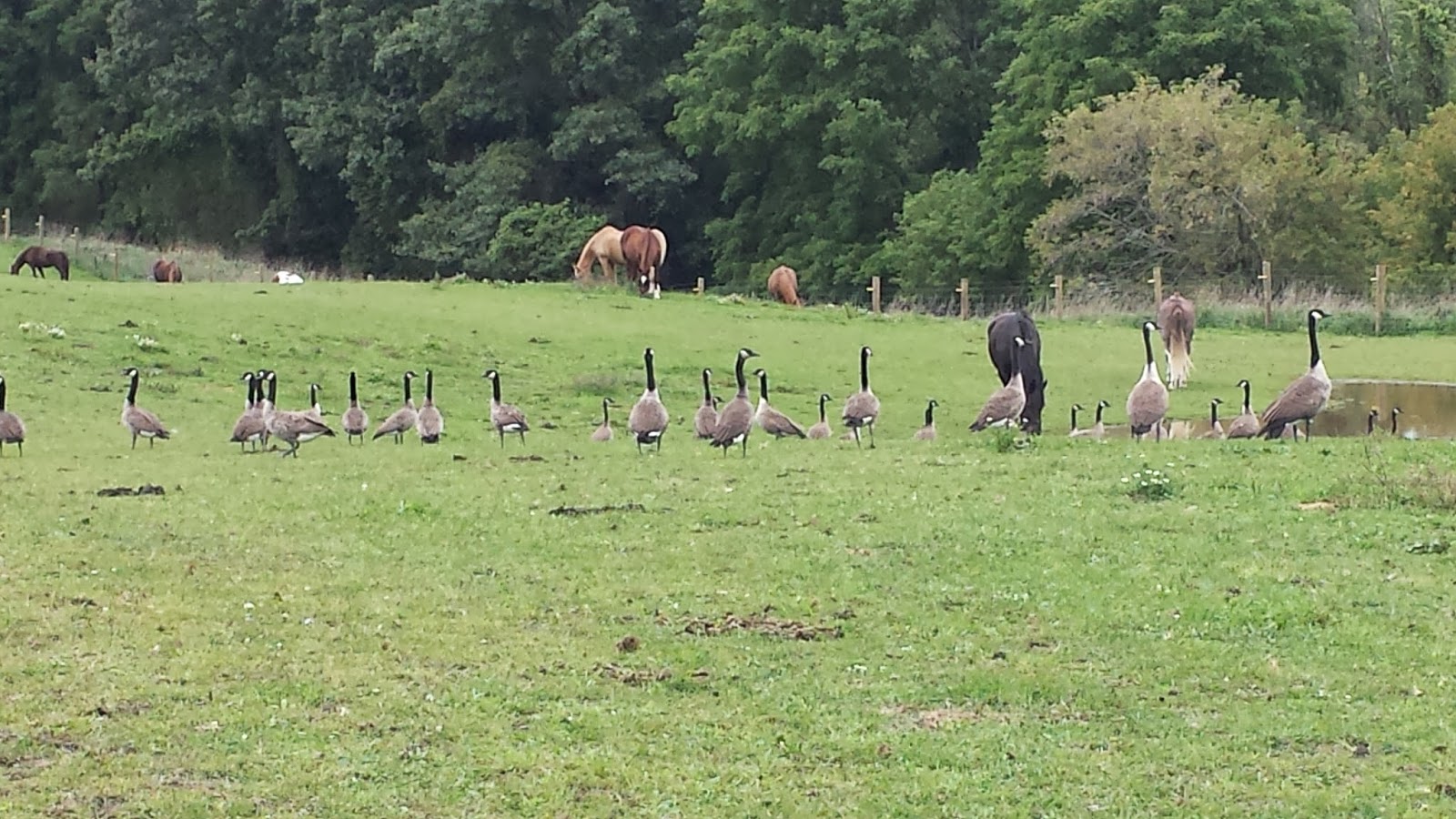 While hiking to the far back 40 to find the boy, I approached a large flock of geese who was sharing grass delectables with the regulars.  I totally disrupted the peace and quiet and off they flew. 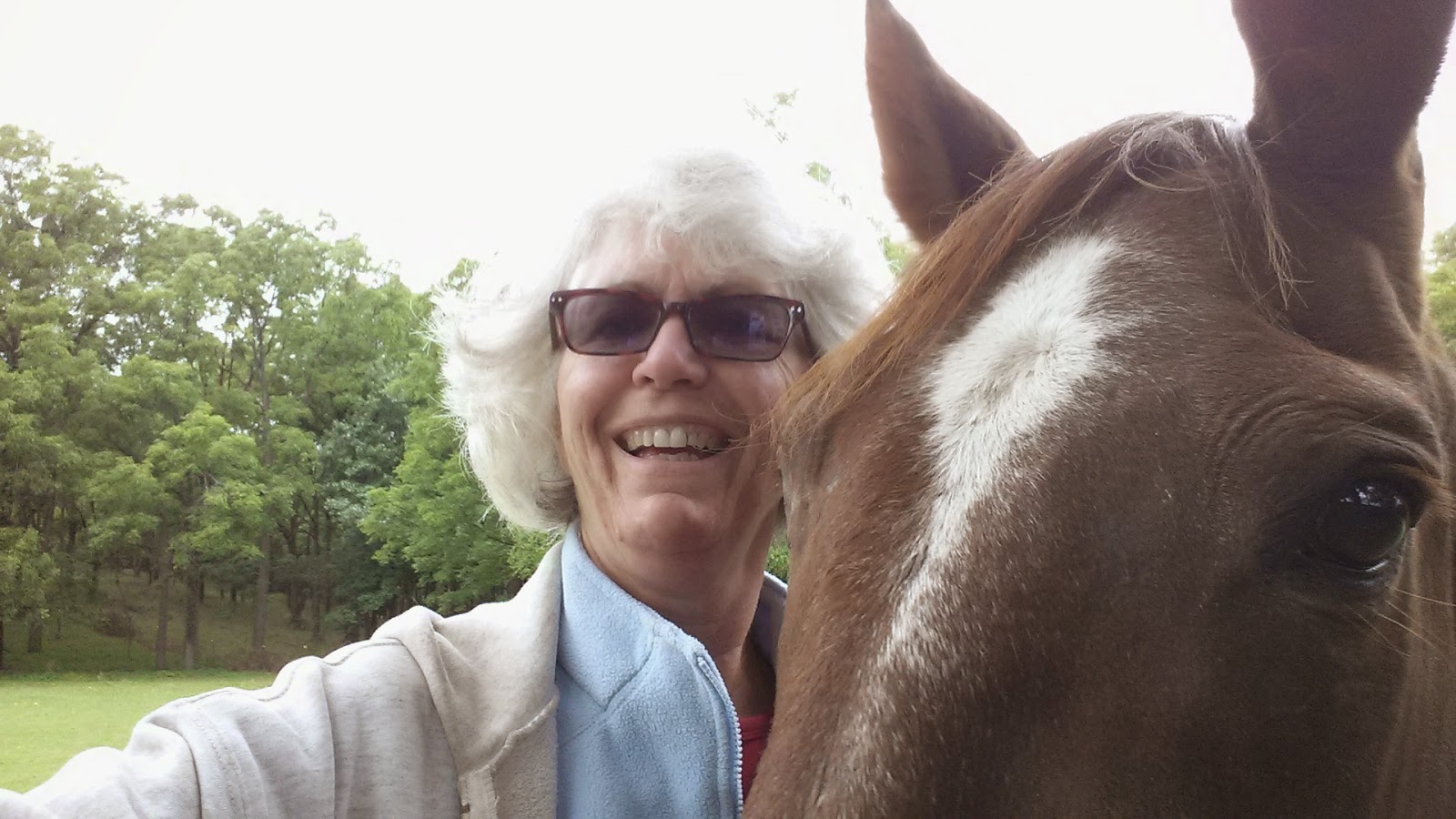 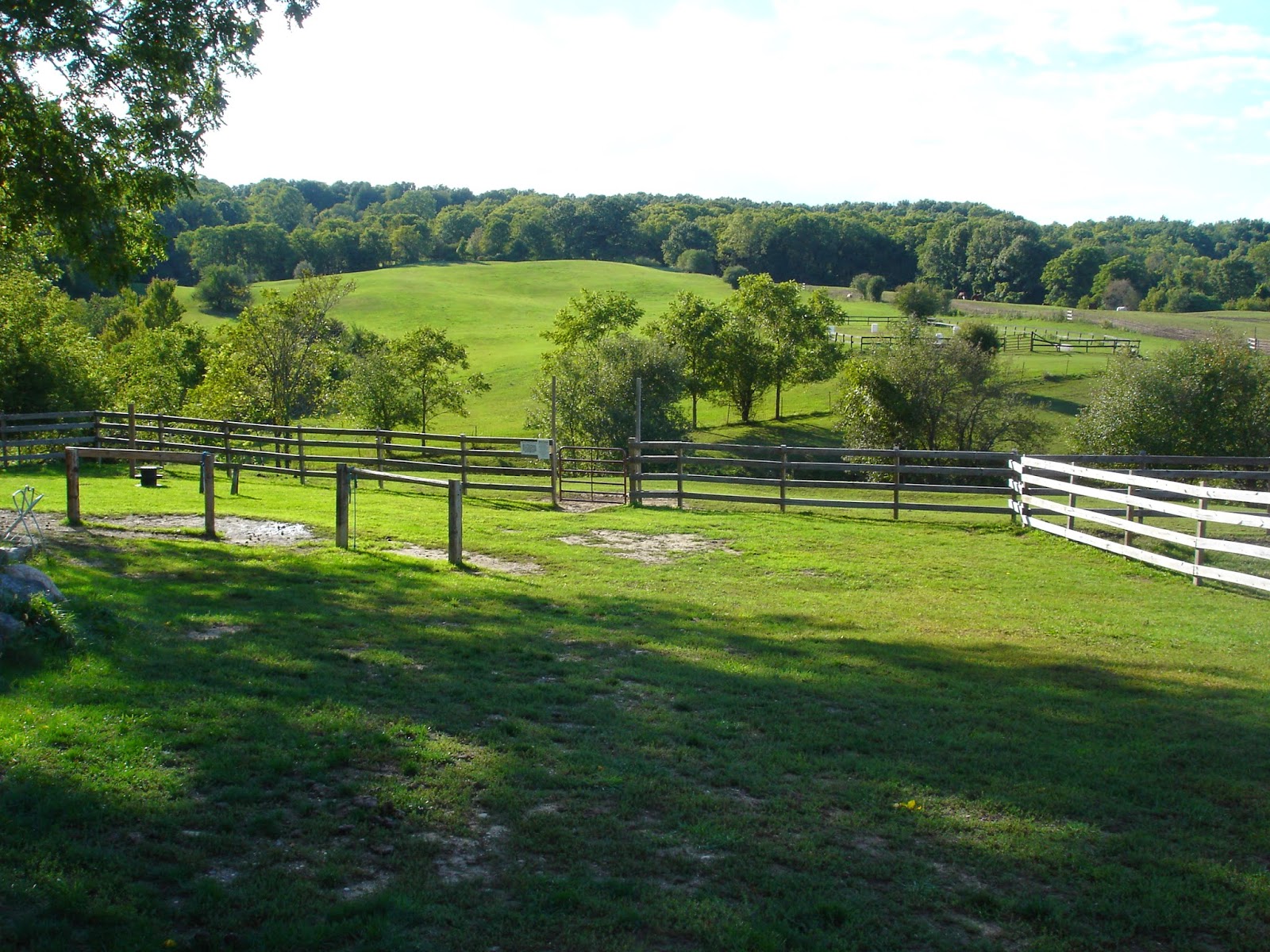 If you look over the hill, past the tree line, that's where the boy was grazing.  Sometimes going out to the farm is a cardio workout, but its heaven for the horses. 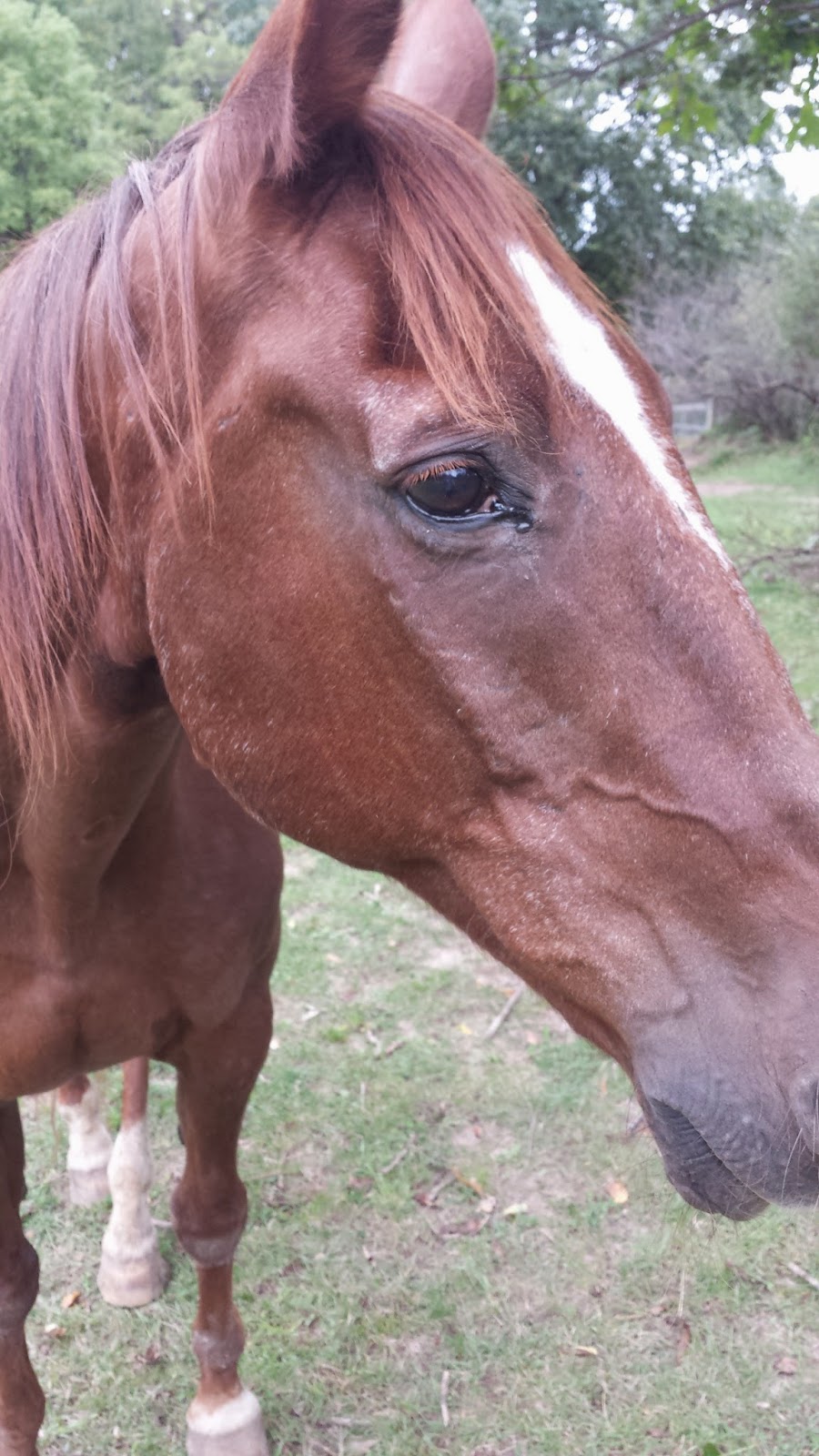 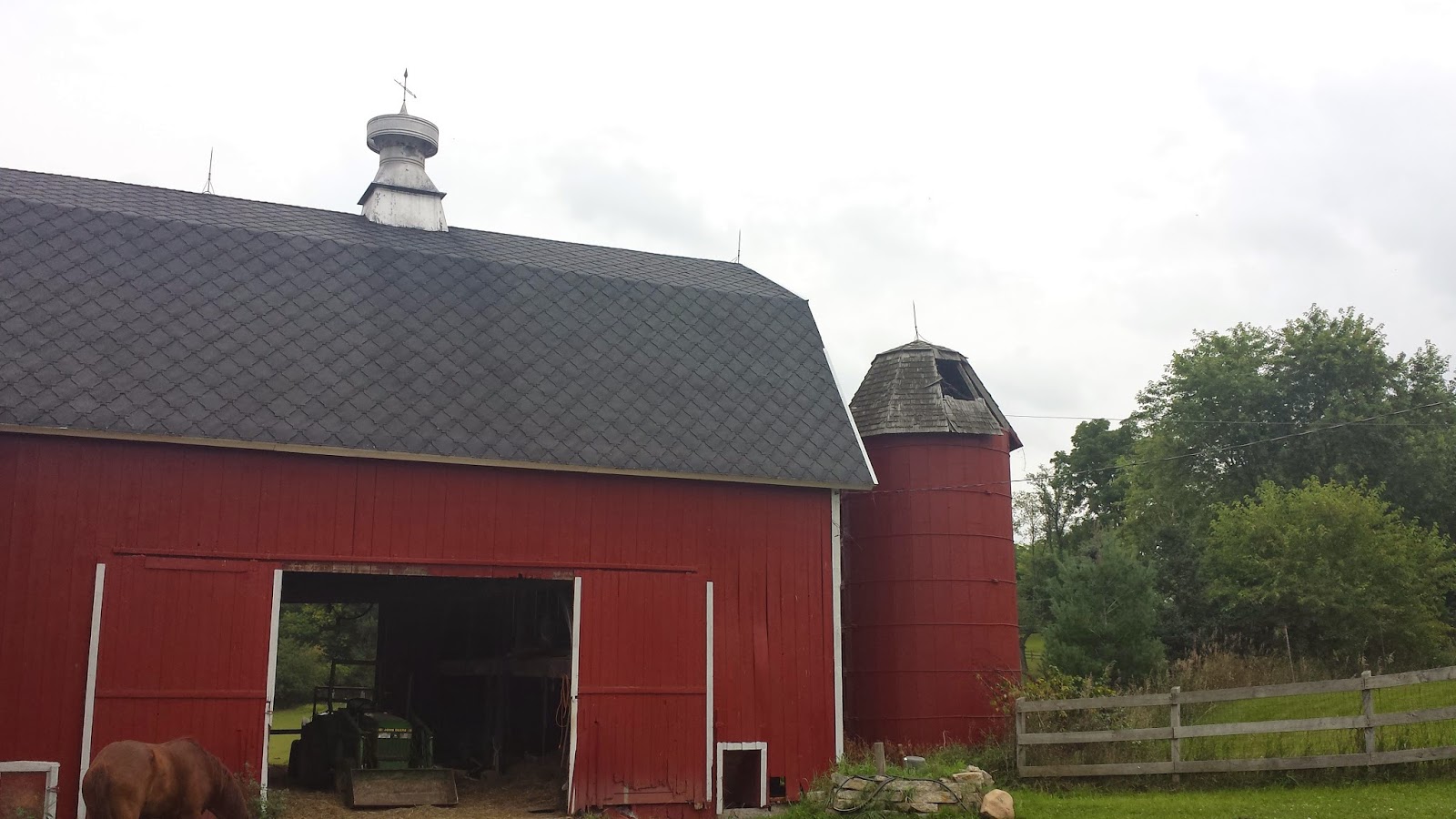 Don't you just love the sight of a barn.
Posted by Janet @ My Miniature Donkeys at 5:18 PM No comments:

For a least a couple of years a little garter snake has made the hay bales in the donkey shed his home.  Often I have lifted up a flake and there he'll be taking a nap.  Yes, sometimes he startles me with a quick slithery exit, but I feel comfortable with his presence.

And then there were three.

Apparently my little snake friend either corralled some pals into joining him or he hooked up with his lady friend and started a family, because now there are three slithering bodies in the hay.   I'm not squeamish around mice or frogs or snakes, but I have to confess uncovering three of them unnerves me.  I'm trying to get over it.

Recently it was "molting season" for my little friends. 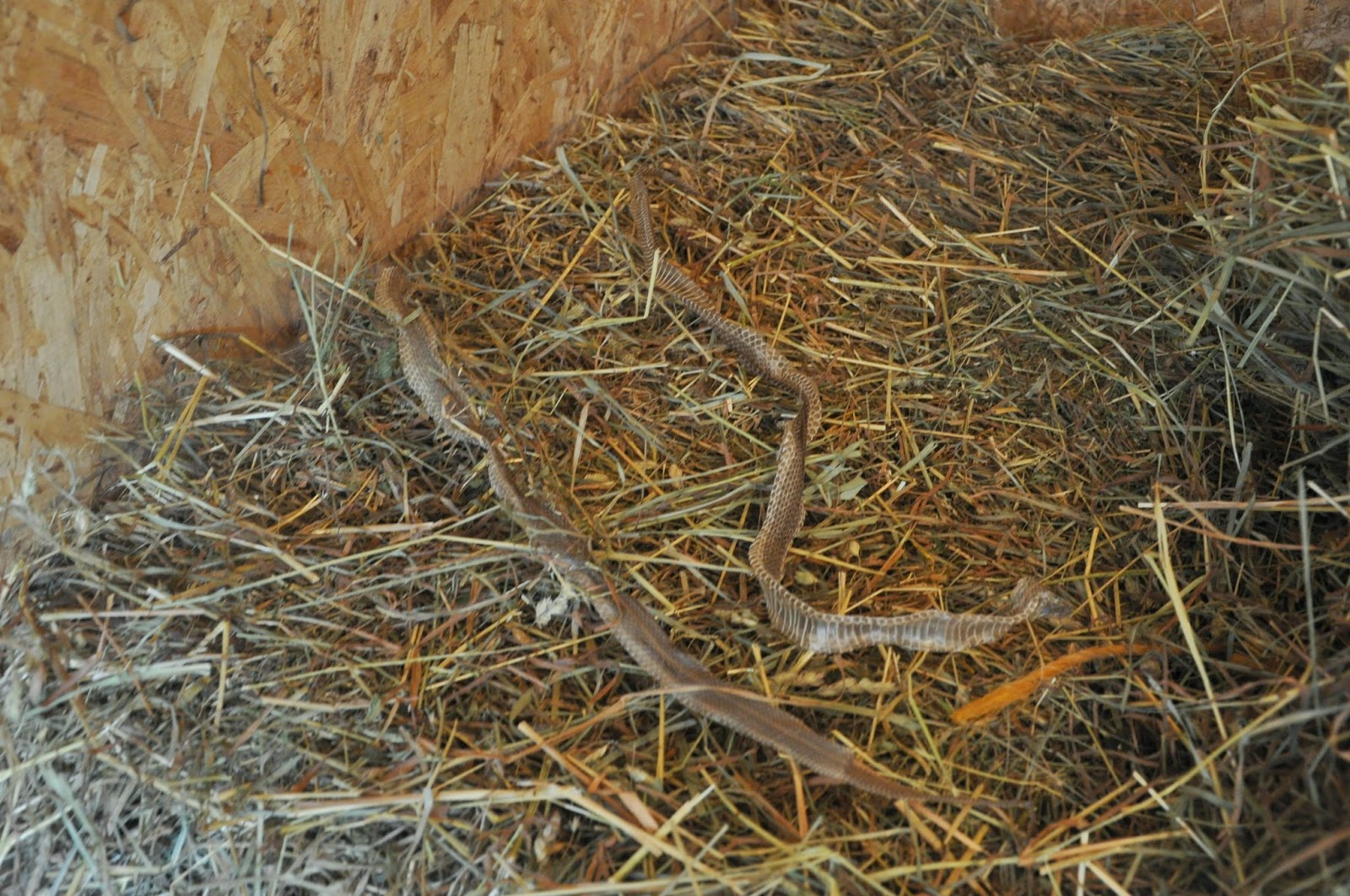 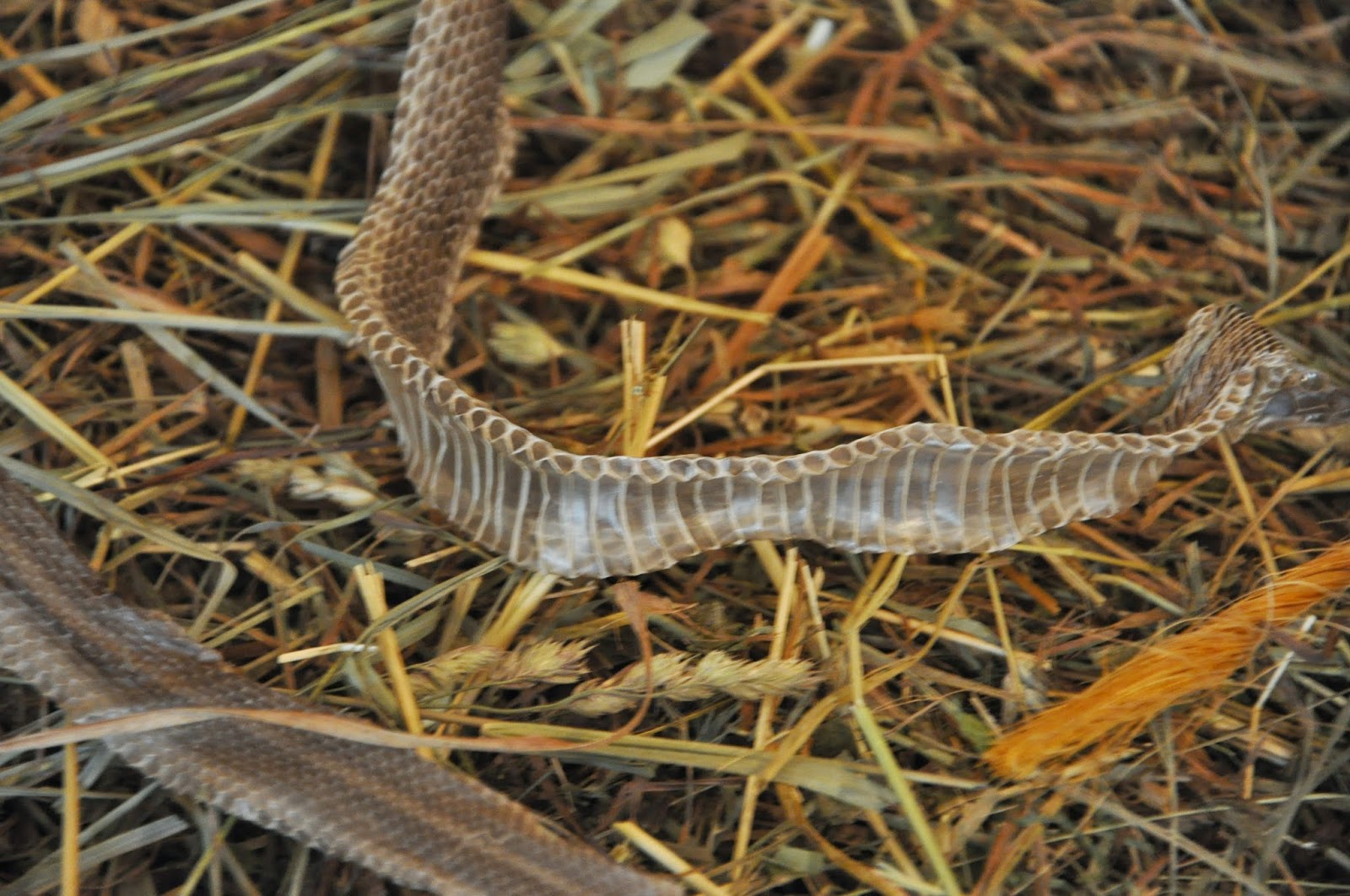 And then there was a third skin down alongside a bale. 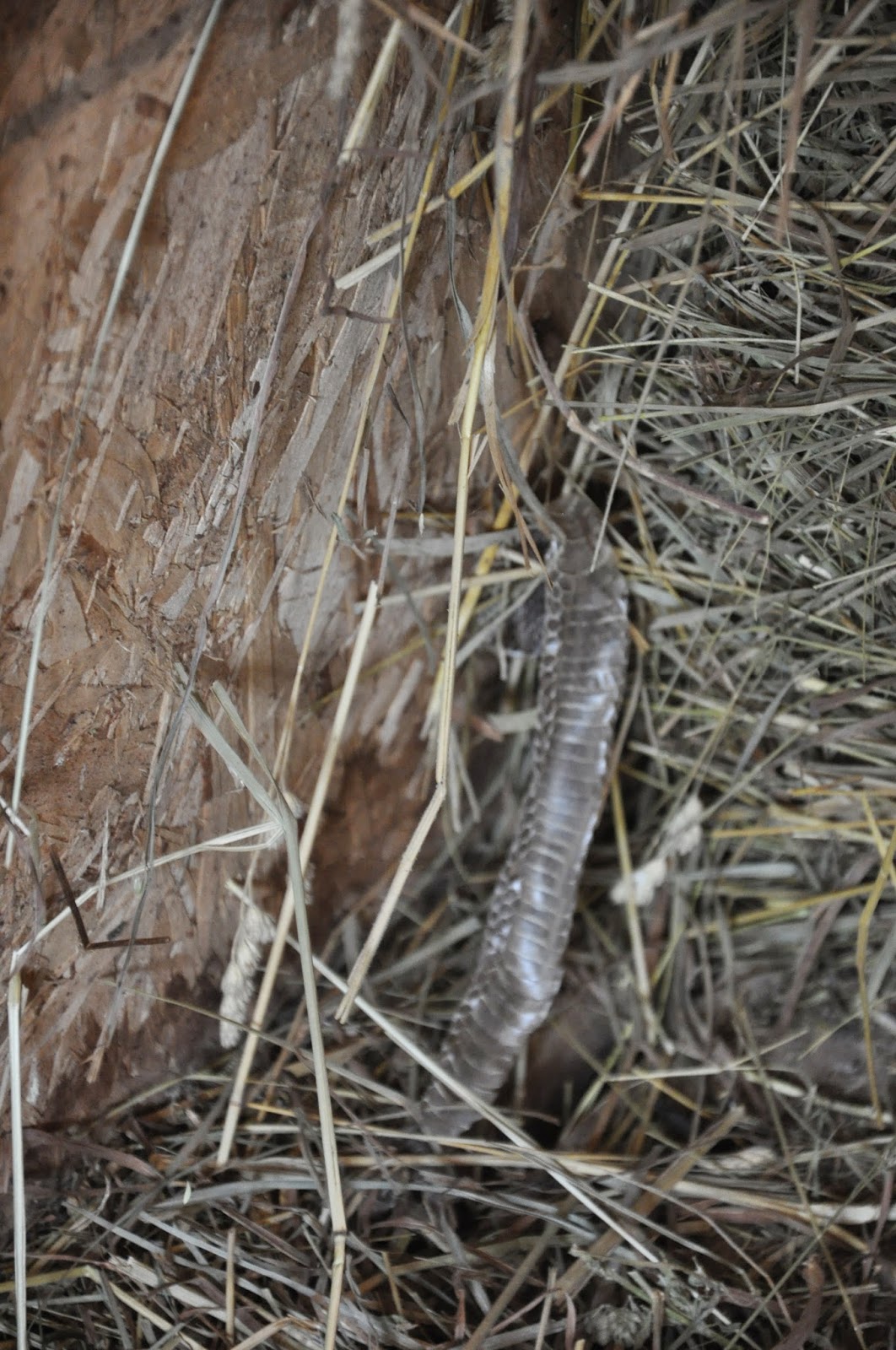 Yes, its a little harder to see.

Isn't it interesting to see the variations in markings in the close-up above.


Although I will embrace most manner of critter, I'm putting my foot down at salamanders.  We use an old shallow wheelbarrow bed as a cover for the bigger manure wheelbarrow (primarily so the dog can't feast on it, but also to keep out the rain). Recently I had left it uncovered and when I approached the big wheelbarrow saw a salamander in the empty upturned cover.  I helped him out by tipping the cover but no, no, no I was NOT going to pick him up.  Then Rick tells me that as we were preparing for a Labor Day bocce party, he discovered THREE salamanders in the court.  OK, I say YUCK!  The thought of picking them up gives me the creeps.

So a shout out to the salamanders in the vicinity.  I have no problem being neighbors as long as you keep a wide berth.  Thank you for your attention to this matter.
Posted by Janet @ My Miniature Donkeys at 11:05 AM 6 comments:

Just have to show you the hibiscus coming into full swing now. 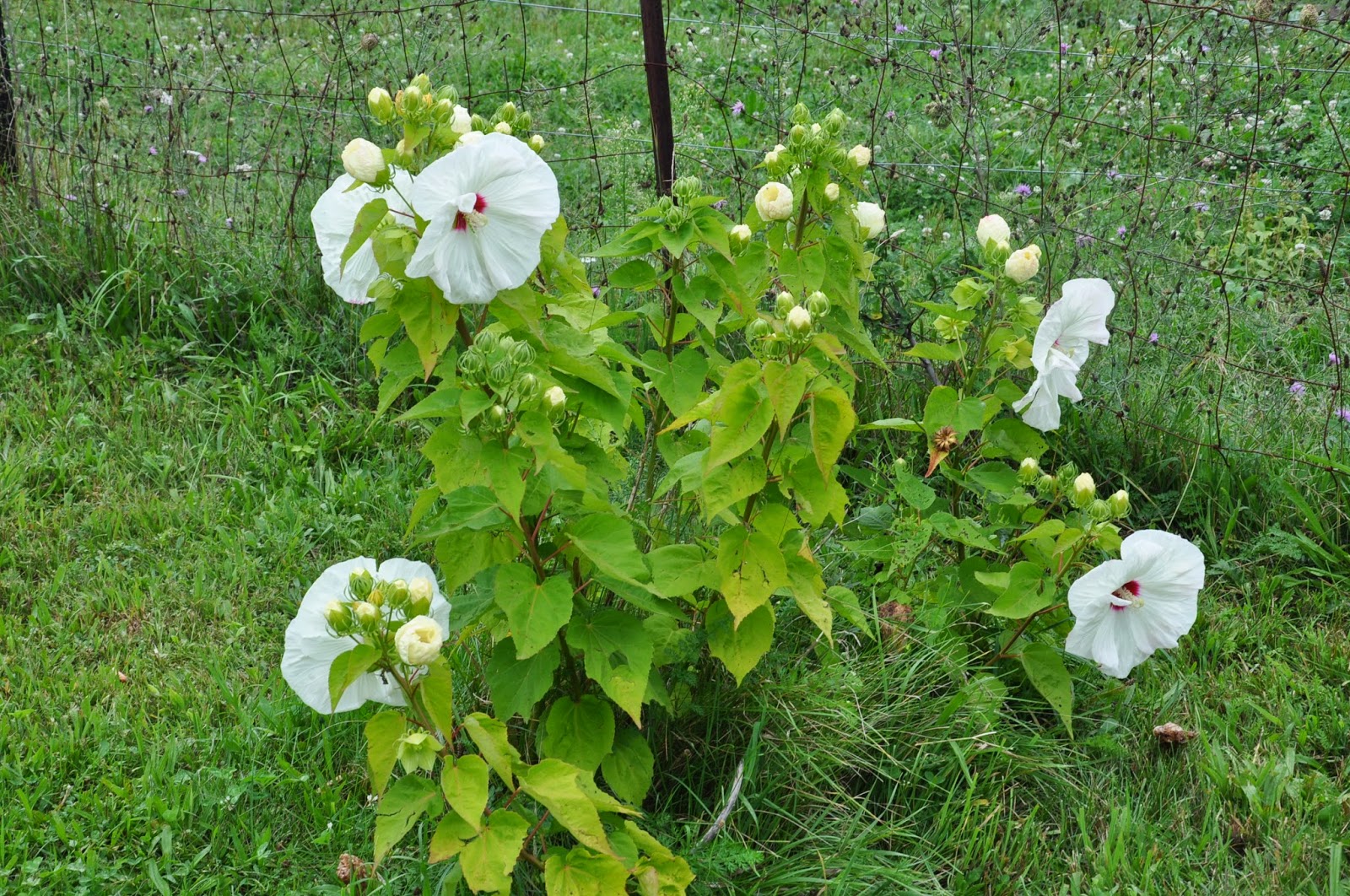 The plant is just loaded with blooms. 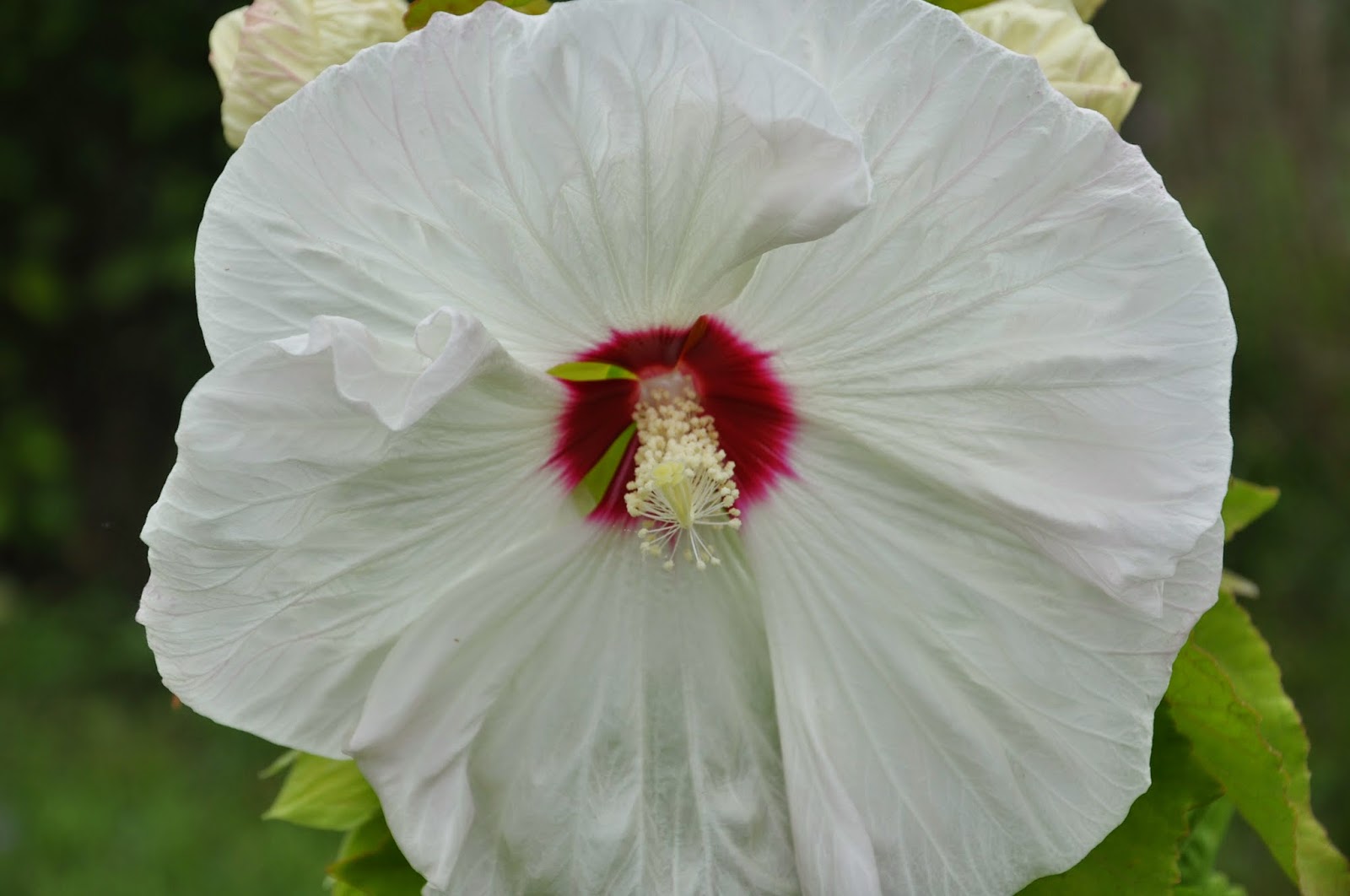 
And this little orange fleur is popping up in the pasture.  Fran says no thank you, I'll eat around it. 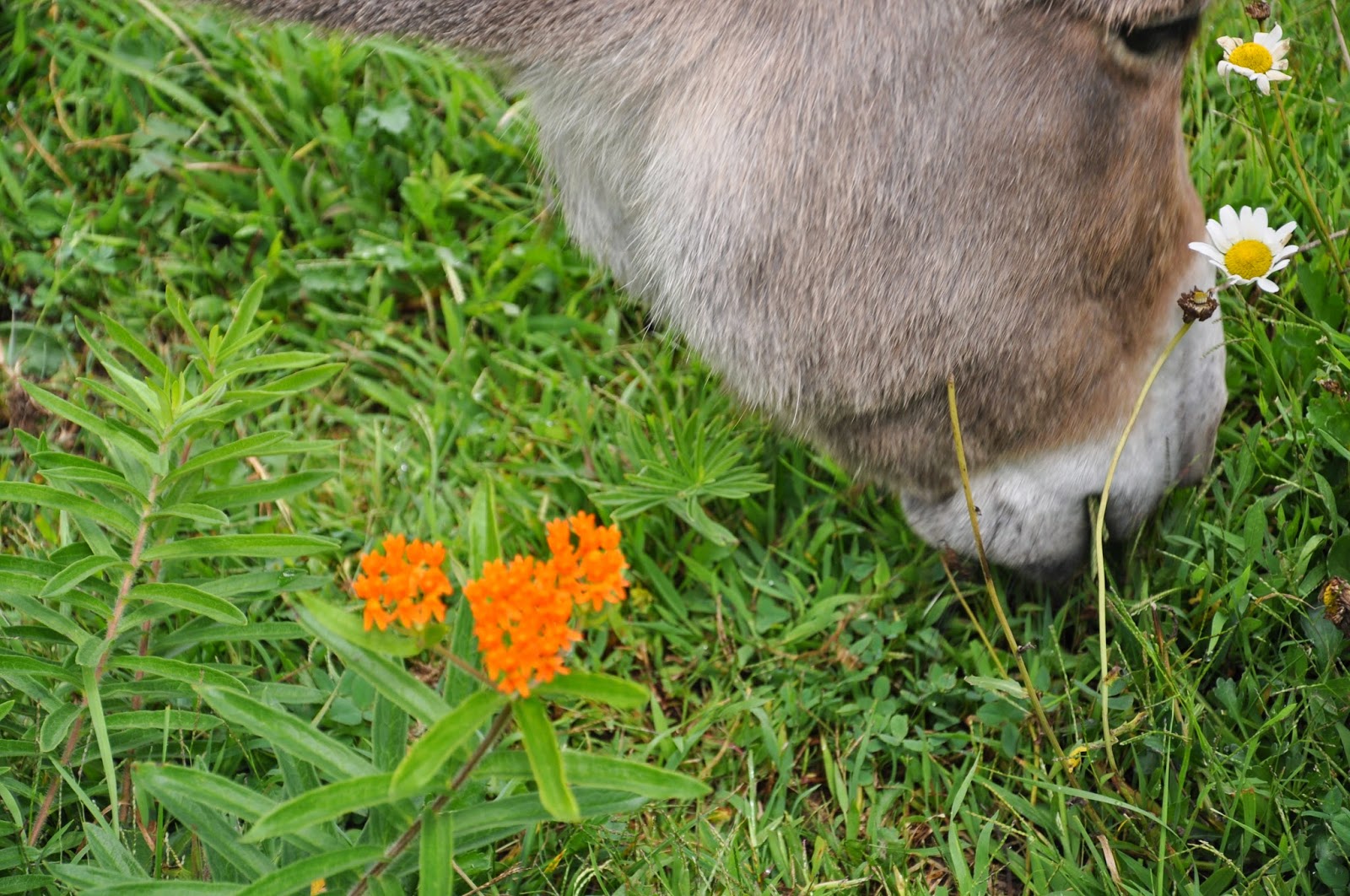 The honeysuckle plant that was itty bitty when I brought it in from the farmer's market this summer is coming into its own.  Delicate vines and delicate flowers, lovely. 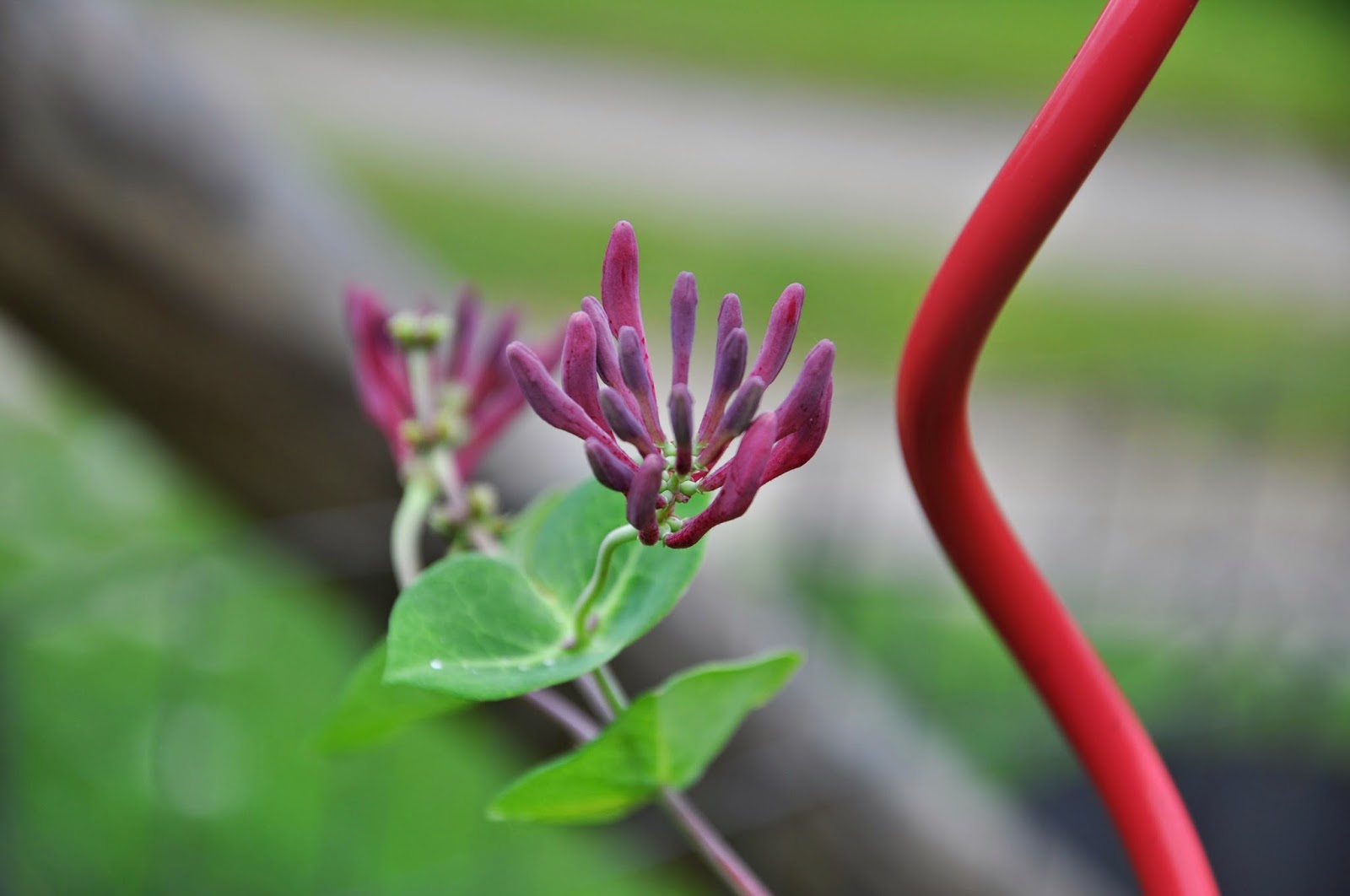 Sneak peek on the next blog installment -- who sheds their skin and hangs out in the hay bales...
Posted by Janet @ My Miniature Donkeys at 6:24 PM 1 comment: