But let's be clear -- the older chickens were not happy with the early snowfall.
Particularly Sweet Pea.
At seven, she's becoming a bit of an old lady.  Even with a heavy layer of straw in the porch and the run she only peeked out, unwilling to step a toe on the white stuff.

The young'uns (Gigi, Stevie and Henri) ventured out to explore. 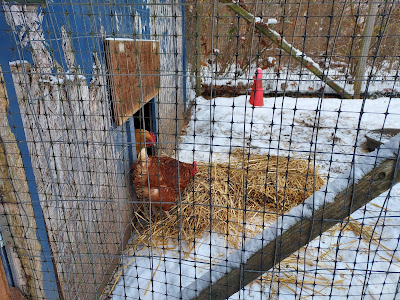 The donks were a little more accepting.  Snow meant the pasture gate was opened where they could wander and pick at tall weeds.

Here they were greeting me at morning's breakfast.  And didn't move as I approached.  Just staring.
Weird. 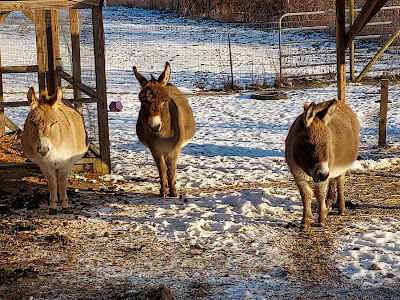 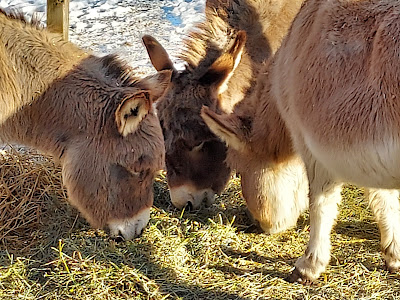 But now the temps have warmed and snow has turned to yuck.

Turning to the inside critters -- 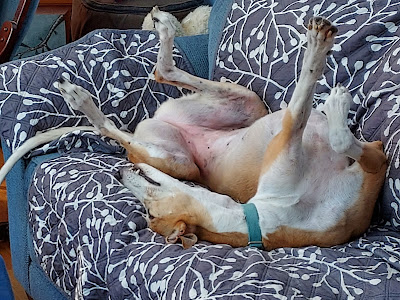 Faith during one of her many naps 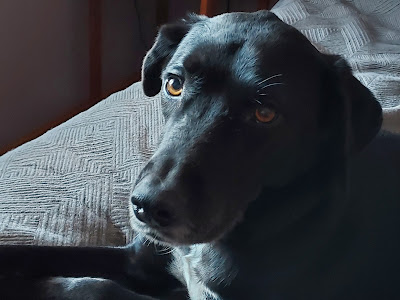 And Phinneas
I sure do love black labs!

Posted by Janet @ My Miniature Donkeys at 7:39 PM 2 comments:

Dear readers,  I ask that you indulge me for a moment as I mention the lost chickens once more.

I continue to particularly miss Cora Bell and Violet, my cuddle buddies.  They were always close, too often directly under my feet and always said they were ready for a hug.  Violet, Jewel (also gone) and Henrietta came together as three month olds from the fabulous local feed store.  They always hung out together and Henri was quite upset the first night she was without her pals.  She has adjusted though and now roosts with the older girls (Marigold still sleeps on top of a door).

And then there was Peggy Sue, who had lived here since 2018  A special girl who was doctored back from an ailment and was hearty and healthy.  And she knew her name.

The only good thing about a reduction in the flock is everyone is getting along better.  Henrietta was becoming quite the bully toward the new girls but no longer terrorizes Gigi and Stevie.  Rick and I discussed whether at 11 girls they could have been overcrowded.  We don't believe so.  With the combination of the old coop and the new coop and two outside runs we think they had plenty of wandering around room.  So I don't have a clear answer.  Until spring we're sticking with the current crew. 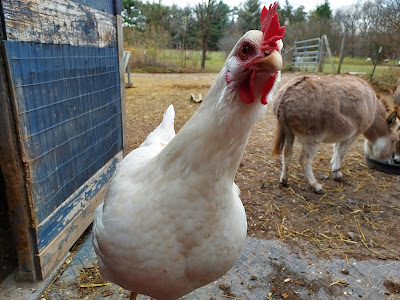 Speaking of Marigold --
Marigold had quite a rough fall molt and looked like she had been through the wringer.  And she was oh so very submissive.  Constantly ducking her head, whether anyone challenged her or not.  Now that she's filling in nicely with new feathers she has gained some confidence.  And she's such a beauty.

Just so you don't say, hey what about those darn donkeys!

They don't particularly like it when I put lunch in the hay net - too much work!  But extended nibbles are good for them.
I made another hay box (with advice from the vet to remove before cardboard ingestion).  But also threw some loose hay.  Buggers are no fools.  Why work when you can walk right up to the hay buffet. 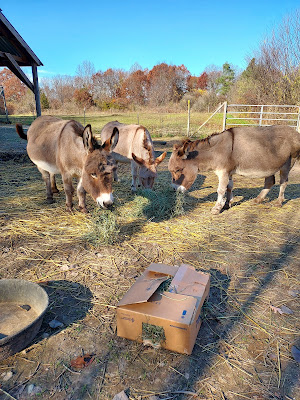 I almost never do a pitch for a nonprofit but I'd like to suggest you wander to the Crossroads Donkey Rescue FB page.  I've adopted three donkeys from the organization (originally based in Michigan) -- Alice and two of the current three -- Sugar and Spice.  Fran, who spearheads the donkey rescues, is a tireless worker who has been known to drive long distances to swoop in and pull donks from perilous situations (read kill pen).  And then deliver them to a loving new home.
So if you have a few extra coins jingling in your pocket, please consider a donation through Paypal using the email: crdonkeyrescue@hotmail.com
or send a check to: 1 Towry Road, Fayetteville, TN
The donkeys would thank you!

Posted by Janet @ My Miniature Donkeys at 7:38 PM No comments: