Morning Scenes on a Teeny Farm 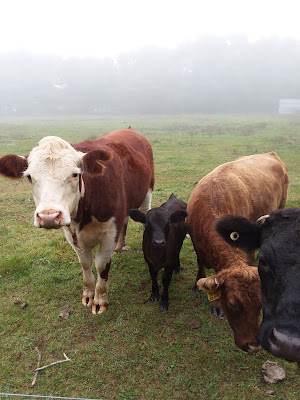 The next door neighbors get a little nosy 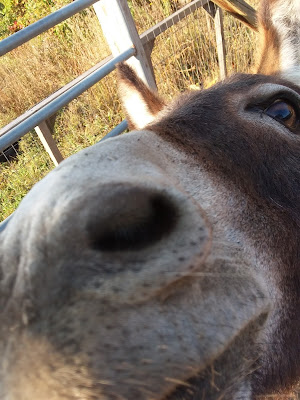 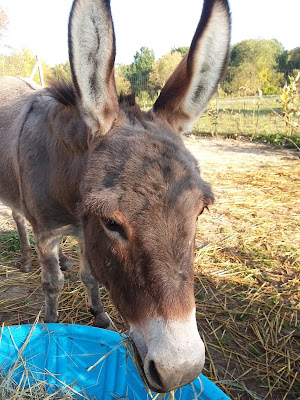 Those ears get me every time 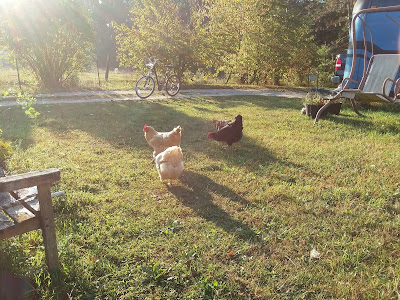 The marauding band of crazy chicks
Posted by Janet @ My Miniature Donkeys at 7:09 PM 8 comments:

Holy toledo.  You should see the chicken coop.  What a feather mess. 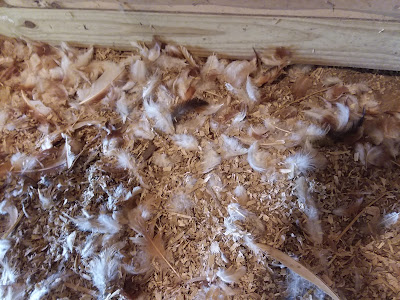 And this picture does not do it justice.  I've not cleaned it out yet, waiting for the feather party to slow down.  I may now be able to safely clean without getting a brand new feather-fall immediately following.  Plus, temps have been abnormally high for late September, so I've promised the girls a fresh coop later in the week when the weather moderates.

And, of course, all this molting means no eggs.  The girls have been on strike.  Hopefully, production starts soon.  I really don't want to have to buy eggs.  NOT from the store, mind you.  I won't support the factory egg business, but from a "neighbor" about 10 minutes away.

The outside pen has been a flurry too. 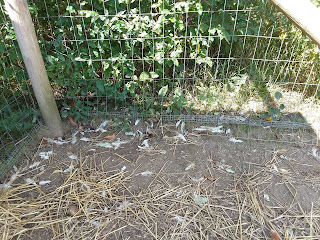 The last we spoke of molting, Buffy was the most barenaked girl. 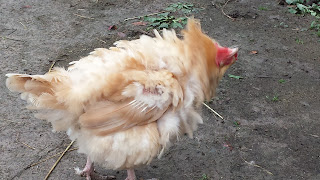 This time Ruby Dee looks the most bedraggled. 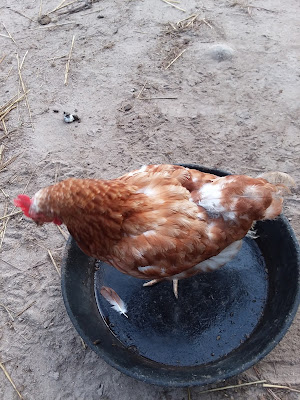 bare spots on her back

By the way, I tried some leftover cooked rice on the girls.  Rubes and Jo attacked it with glee, while Sweet Pea and Buffy declined.  And, the other day all four turned up their noses at some leaf lettuce.  The donkeys gobbled it up.

Ya just never know with this bunch.
Posted by Janet @ My Miniature Donkeys at 5:53 PM 3 comments:

Fermented Grain and A Swimming Pool

This post could also have been titled, the experiment that didn't quite work.
But let's start at the beginning.

Friend, Kris, texted to say a brand new local brewery was disposing of spent grain that could be used for chicken feed and for pigs and goats.  What a find!  Free donkey and chicken food.

I did do a bit of checking online to see if the stuff was safe and found some farm folks have fermented their grain intentionally as they believe it's more nutritious.  OK, we're good to go.

So Rick scooted over and we received a 25-lb barrel of fermented grain. 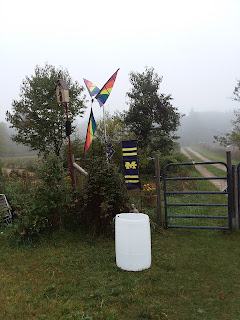 He immediately scooped a generous portion for the donks.  They walked away.  And would not return to the bowls.  Nope.  It was icky.

So then we tried the birds. 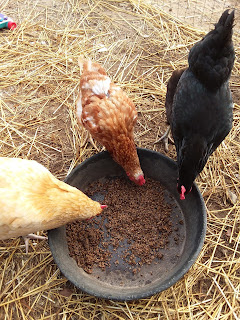 And they agreed it wasn't bad, but they didn't consume enough to make a dent.
Soooo, a quick text to the neighbor to see if she wanted 25 lbs of grain for her cows and we were able to pass it along.

I find there's always a bit of jockeying around to make the donkey and chicken environments as pleasant and healthy as is possible.  To that end, the wading pool that had been in the chicken run for their amusement (but was also a failed experiment) was shifted to the donkey yard to allow for easy feeding without the consumption of dirt -- NOT a beneficial extra ingredient. 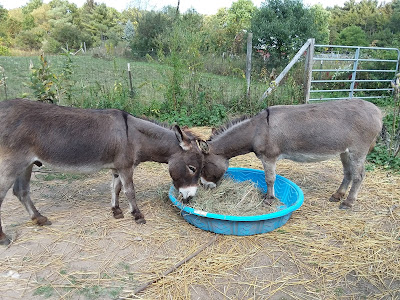 Yes, standing in the pool is always helpful.

And the girls got the two tires that the donkeys have ignored, and, a branch.  I'm not sure the tires are a hit (just something to climb on) but the branch is getting a little more attention. 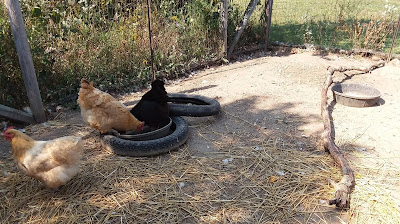 I wish I could hit on a toy for the donks that tickled their fancy but so far everything has been a flop.  Fancy Jolly Ball - no.  Beach ball to toss around - no.  Tires to nose around - no.  If anyone has a suggestion, I'm all ears, as are the donks.
Posted by Janet @ My Miniature Donkeys at 6:00 PM 1 comment:

I first got into chicken keeping in the spring of 2015.  Two hens remain from those original four.  Sweet Pea and Ruby Dee.  Are those two more important to me?  Perhaps not, but they do hold some sort of special place.

And little Ruby gave me a scare a few days ago. 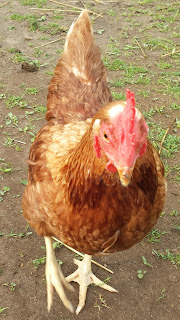 I'm just hoping we're out of the woods.

I'll go into a bit of detail in case any of you are chicken savvy -- Melba?  Perhaps you can help diagnosis.

I noticed Ruby's rear-end feathers looked "dirty" and thought she needed a little sponge bath.  I didn't get to it immediately and soon after saw she was lethargic.  A little panic (and guilt) set in.  If you recall, Emmy Lou, who was also an Isa Brown, just died in June and I did not intend to repeat that episode.

A little  sleuthing on the internet led me to think she might have a bound egg.  The advice was a sitz bath and abdominal massage. 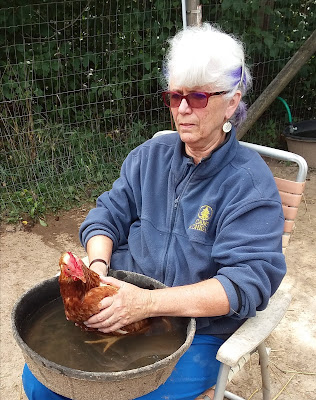 Rick stayed nearby, a good thing, since the girl almost escaped during the 15 minutes of warm soaking.  Then the massaging.  Rick felt no tell-tale sign of a lodged egg.  BUT, we did see a little egg string in the sitz bath water.  Of course I returned to the internet to see what the signs of an internally broken egg are.  That led us to inserting, via eyedropper, a small amount of oil into her vent.  I'm truly not sure what we accomplished, but she seems to be displaying normal behavior now.

By the way, she did not object too strongly to being dried off from her bath with my hairdryer.
Who woulda thought...

Posted by Janet @ My Miniature Donkeys at 6:12 PM 8 comments: