Since we last spoke our household has encountered a couple of issues.

I came down with a case of the stomach flu to outlast all stomach flus.  It was a doozy for sure.  Christmas prep disappeared, but my yoga training helped me to take it in stride.  Why get kerfluffled if the tree didn't go up on the normal schedule.

The bigger issue concerns our senior dog Gunner.  He's 13 years old, give or take, and symptoms of distress reappeared after several months of keeping them under control with CBD.  We've had several conversations with our vet to figure out the best course of action and have recently introduced a pain med in addition to the CBD.  So far so good, knock on wood.

So today you get a better look at Gunner, our ever happy go lucky tail-wagging little boy.

About 10 years ago we were thinking about a companion for Dudley, our super smart lab mix.  I happened to see a dog featured through a rescue group, Heavenly Paws, with the name of Gunner.  The name alone drew me in.  About 30 years ago we rescued a pointer mix by the name of Gunnar and she was such a very good girl.  I thought, holy cow, another Gunnar!

Gunner had been picked up on the streets of St. Clair (or maybe St. Clair Shores) and was on the verge of being euthanized when Nancy S. of Heavenly Paws swooped in and scooped the little boy up. 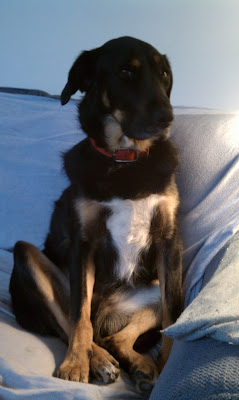 They thought he was a rottweiler mixed with Bernese Mountain dog.  He had heartworm, an inverted eyelid and had not been neutered.  (our guess is when the owner discovered he had heartworm, out he went)  So we said sure!

Compared to super duper smarty Dudley, Gunner's brain power paled, but that little stub of a tail (yes it had been docked) would wiggle over just about anything.  It still does.

At the time, Gunner weighed about 60 lbs, Dudley weighed in at about 80 lbs so Gunner was known as Peewee.  If truth be told, Gunner has put on more than a couple of pounds since then. 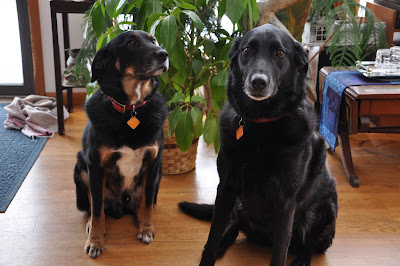 Gunner always looked to Dudley for guidance in new situations.  For instance when the two went to the dog sitter's together for the first time, Dudley was so exuberant about arriving, Gunner knew it was OK and felt comfortable joining in the canine fun. 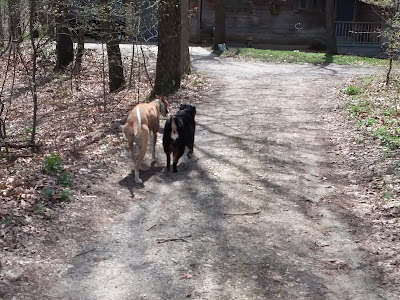 So now, we don't know how much time we have with the little boy.  But he will be loved every minute. 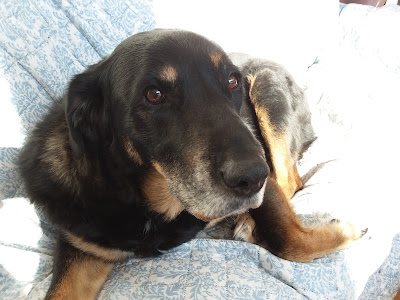 Posted by Janet @ My Miniature Donkeys at 6:24 PM 3 comments:

We live less than an hour away from Oxford High School, the site of the country's most recent school shooting.  Because of that proximity we've been privy to more detail about this horrific incident, more so than we have in previous school incidents in other states.  It just doesn't feel like the right thing to do to try to make you smile about this or that chonkey behavior.

So we'll take a break and return next week.

In the meantime keep your socks up, smile at your neighbor, kiss your kid, kiss your dog and pass the kindness forward every day.

Posted by Janet @ My Miniature Donkeys at 6:36 PM 1 comment:

Today's teeny tiny farm vignettes seem to focus more on the clucks.  I know, I know, I've heard it already from the donks.  They need more column space.  I'll work on it --  next week.

I''ve told you how I like the caretaking philosophy of Fresh Eggs Daily.  I read her posts often and had a "duh!" moment in one of her more recent stories.  She talked about dumping chicken feed, supplements and nutritious add-ons in a garbage can.  Now why hadn't I thought of that!  Instead of lugging the small chicken feed can to the horse trailer where feed is stored, why not use on of the garbage cans in the hay aisle which hold over 50 pounds.  So I mixed my three chicken feeds and the one supplement I'm using at the moment into the can. 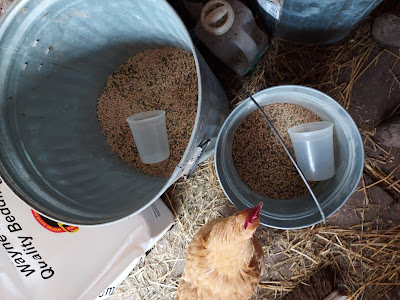 Sweet Pea inspected the final mix for quality control.
It is 1000 times more convenient to refill the small can from inside the barn.
I took these photos before our snowfall Thanksgiving weekend.  Using pumpkin halves after the chickens have enjoyed the seeds and pulp to hold seed and Grubbly treats. 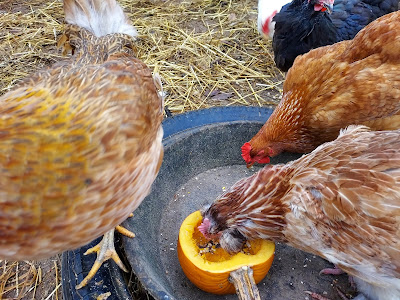 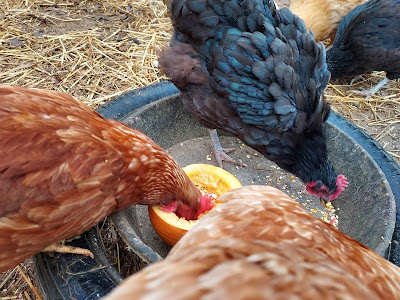 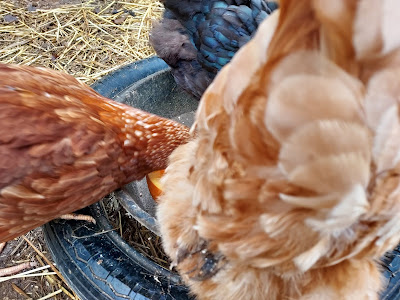 And of course there's the inevitable photobomb
I haven't yet made the coconut oil suetblocks -- have to get to the local feed store for the bulk shelled peanuts -- but I put a commercial suet cake in my new nifty holder.  I only saw two of the hens taking any interest, but suddenly the holder was empty, with the latch open.  Now what one minute, how did the clucks do that.  The reason I got the cute version is it appeared more durable and the catch was stronger. 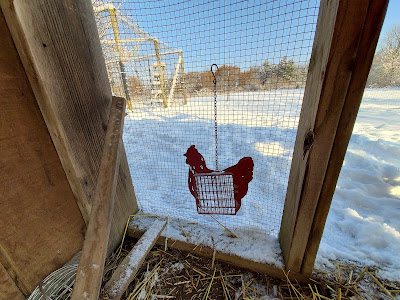 For my next photo, be forewarned, if you're squeamish about donkey poop, avert your eyes. 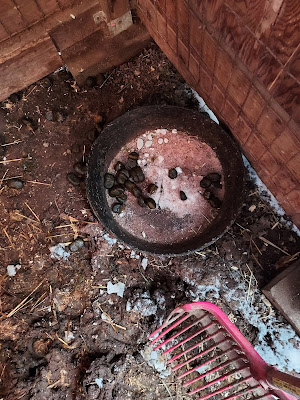 Only in the winter do the girls use the salt bowl as a toilet
We've had the talk over and over and yet I still arrive in the morning to this sight.  I wish one of you, dear readers, would come over and try your luck at a donkey lecture.
And here's a donkey in heaven.  All alone enjoying dinner hay without two bullies trying to shove her out.  I can just hear Gabby sighing in contentment.  (the other two were still lapping up their small bit of Equine Senior) 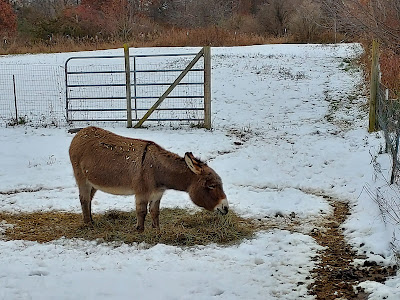 Finally a little birthday scene.  I had one of those pesky birthdays last week and Rick got me a grow light for the plants wintering in the sun room.  And voila, it was set up today.  Perhaps the plants were sighing in contentment as well. 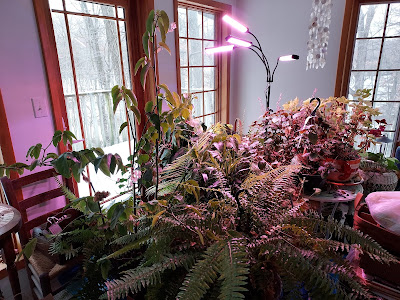 With the remote in hand, I announced "lights on!" and "lights off!" about five hours later.  It's the small pleasures.
Posted by Janet @ My Miniature Donkeys at 6:58 PM 1 comment: