Around any farm, teeny tiny or otherwise, more than likely hay is an important component.  As it is here.
A couple of weeks ago I contacted my "hay guy" and asked to pick up our normal monthly supply of 2nd cutting.  If you're a donkey person, you might pause, raise an eyebrow, and say 2nd cutting?

Well here's the backstory.
Our donks eat 1st cutting most of the time.  In fact for many years they only ate 1st cutting.  It's less rich than 2nd cutting.  Important note: donks can get pretty chubby from too rich a diet.
But a couple of years ago our hay guy ran out of 1st cutting and I switched for the winter.  And did again last year.  And intended to switch again this winter.  The donks had gotten two months of 2nd cutting when two weeks ago I found out his supply of 2nd cutting was gone.

To be honest I was thrown for a loop.
Apparently he had gotten some huge hay orders from new customers.
And was almost out of 1st cutting too.

But he had enough left for us to fill the horse trailer and the barn with no room to spare.  The kicker -- it's got to last us through March.

Anyway, forward to the morning we ran out of the November stash of 2nd cutting and gave the donks the 1st cutting.  They were not happy.  At all.  Where was the lush green yummy hay they had gotten used to.

When the donks need to tell me something at mealtime at least one of them finds me in mid chore and stands there looking at me.

My job is to read their mind which, to be honest, isn't too hard.
Usually the issue involves:  Sugar and Spice edging Gabby out of the hay and she needs me to intervene, they need me to throw more hay, or they're being picky and want grain.
When I threw the 1st cutting they came en masse and told me this..was..not..satisfactory.  I had to tell them, too bad, that's what we've got.

A couple of mornings ago the issue was the wind.  There was hay in the yard, but one delegate came into the barn while I was cleaning the coop to tell me they wanted to eat in the barn. 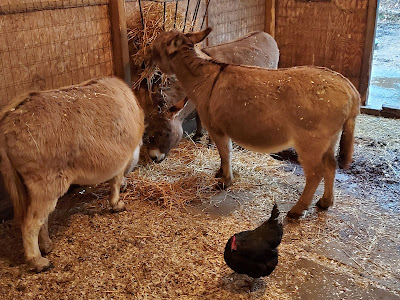 I told you I'm pretty good at reading minds.

On Sunday they said they needed a walkabout. 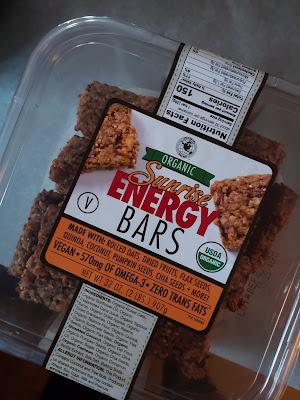 deeeelish
Posted by Janet @ My Miniature Donkeys at 7:33 PM