First and foremost I'm happy to say integration of the little girls continues to cruise smoothly, mostly.  There's a bit more bickering than usual, but keep in mind there's always bickering.  You all know where the term "pecking order" came from.  And when it comes to food, nobody likes to bicker better than a bunch of chickens.

Violet is turning out to be a little love muffin.  She likes to be around me, often underfoot -- literally.  I have been put off balance on more than one occasion when she appears directly under my foot.  Amazingly she tolerates me picking her up and stroking her; this has been unheard of with our other chickens until they've been well established. 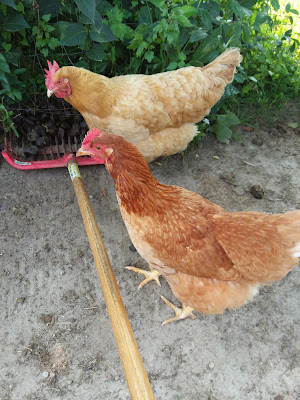 Two nights ago when I tucked everyone in for the night, the three little girls were in their chosen spots for bed and I was giving Violet a little lovin'.  Whomever was next to her apparently felt I was taking liberties and pecked me!  I had to laugh.  Don't know if it was Jewel or Henrietta.  By the way I think I'm getting better at telling the three girls apart.  Mostly by the amount of white on their tails.

We had a brief visitor to the house recently.  A friend, who happens to be a monarch butterfly expert, brought me a chrysalis that she expected to a transform in a few days.  I had it in the kitchen window to keep an eye on the development. 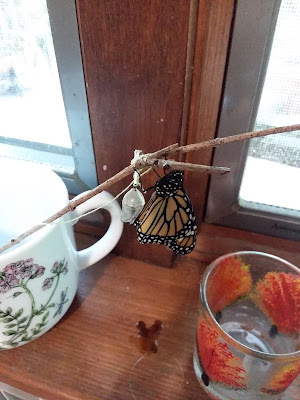 My friend told me what changes to look for and gave me a timeframe, but I wasn't seeing it.  Suddenly yesterday the beauty appeared.  From a simple photo my friend identified her as a female.  I took her outside where she tested her wings, then was still, then tested her wings again.  I was worried because it was going to dip down to 50 degrees overnight.  This morning she was still clinging to her little stick.  I'm guessing it was about 24 hours before I saw she had disappeared from our deck, launching on her new stage of life.  It was surprising how protective I felt after only having her in our "custody" for a few days. 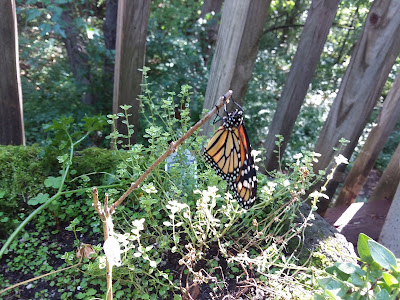 And now for your amusement, I give you Sugar's version of intermittent windshield wipers.

Posted by Janet @ My Miniature Donkeys at 6:45 PM