Peggy Sue and her Eggshells

Hold onto your hats, there's a sexy topic headed your way.

Hopefully you all know that because today's chickens have been bred to lay "too many" eggs, this abnormal egg production has taken its toll.  One of the effects is to deplete calcium levels in hens' systems.  Most commercial feeds add oyster shell, but I like to complement that with the girls' own eggshells.

For the longest time we simply kept the shells in a designated bowl on the counter, let them air dry and then I'd smash them up.  But this summer that didn't work well at all; I'm only guessing it was the unusually extended humid weather we had.  I've now taken to baking them in the toaster oven. 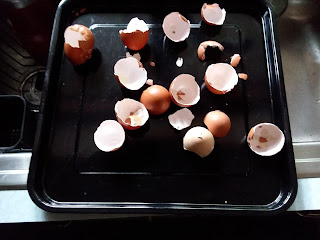 15 minutes at 250F
Why the toaster oven -- use less energy is my motto.
I'm sure your next question is do the chickens actually eat the shell pieces.  Probably not all, but some of the girls actually wait for me to put the shells in. 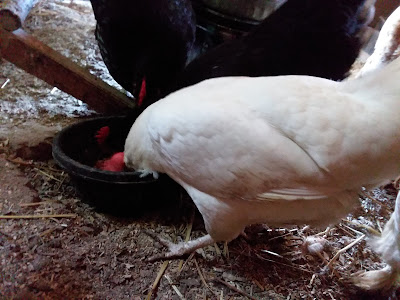 Peggy Sue loves her eggshells.  There are three feed containers, one a small rubber bowl.  Usually in the morning I pick that bowl up, place it on the shelf and put feed followed by shells in the bowl.  Pegs can hardly contain herself waiting for the bowl to come back down to the ground and hops up onto the shelf to have the shells all to herself.  Sadly I tell her she has to share and the bowl goes back down.
*  *  *  *  *  *  Say Yes!  *  *  *  *  *  * 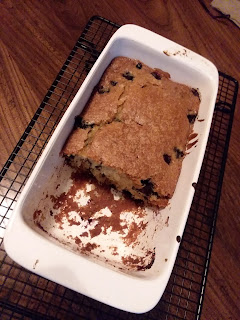 This vegan version was pretty darn deelish.  Clearly I didn't frost it, who needs more sugar, right?
One word of advice -- follow the directions for the amount of blueberries to use.  After putting the 1 cup in I said, oh that's not enough and added more.  Stirred.  Added a few more.  Too too many.  In spots the blueberries were barely held together by batter.

Posted by Janet @ My Miniature Donkeys at 7:00 PM