And Then There Were Three

I have put off sitting down to write this.  I just don't want to do it.
So this may be briefer than you'd expect. 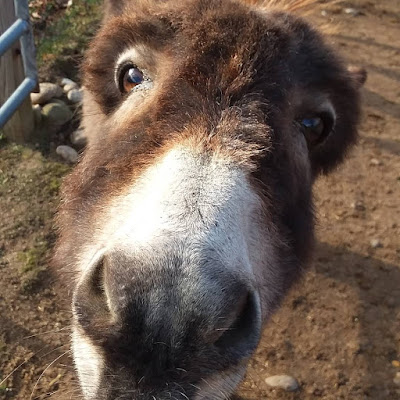 It was sudden and harsh.

He fell backing out of the chicken coop.  Rick and I tried to get him up but couldn't.  The vet was called and she succeeded, but he went down again.  He was back up and eating when she left.  But he went down shortly after and went horribly downhill overnight.  He had to be authanized the next morning.

What the hell happened?  We don't know.  I feel certain it had to be some hidden system failure.  The vet reminded me that donkeys are stoics who only let you know something is amiss when there's a big problem.  If Luigi gave me a clue, I missed it.  And for that I will be forever sorry.  Even now 11 days later, I'm tearing up writing this.

Luigi was the light of our little herd.  He is missed every time I go out to feed. 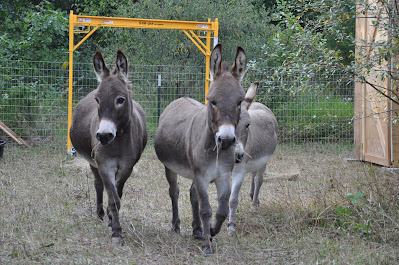 This was taken shortly after the donks settled in - Rick was just finishing the barn.  Luigi on the left, Gabby center and Fran hiding on the right.  Weeg was six in that photo, so 18 this year.  Much much too young for a donkey to die.

In the winter time, Gabby darkens up and there would be times I wouldn't be able to tell the two apart.  Every day I tell her how much she looks like her dad. 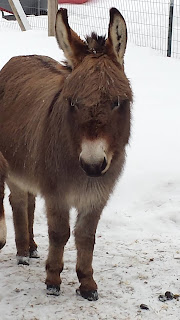 Gabby
I was afraid Sugar and Spice would exclude her, but thankfully that has not been the case.  Almost immediately I observed Gabs with her head draped over Spice's back, just resting there.  And, again the next day.
But my little herd has lost their protector.  The boy who would listen for unusual sounds while the girls were eating, ever watchful. 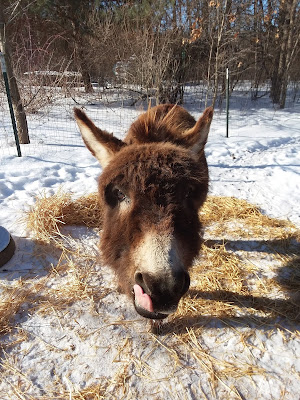 I miss you terribly little boy

Posted by Janet @ My Miniature Donkeys at 5:49 PM