One of the manmade signs of spring at our house -- the windmill.  It goes up in spring and gets put to bed for the winter.  We've ended up having many of them over several years; the fabric deteriorates over time.  Rick has patched them, but there comes a point I say no, it's time.  Because the price has gone way up, last year I had to settle for a smaller version, but it still makes me smile every time I come down the driveway.

Yes, at the end you were witness to three crazy donkeys claiming starvation.  Here they go into their posturing antics further.
Drama queens for sure
I asked Sugar for a nice close-up and she said, sure.  One of the few photos of that pretty girl without those wild eyes. 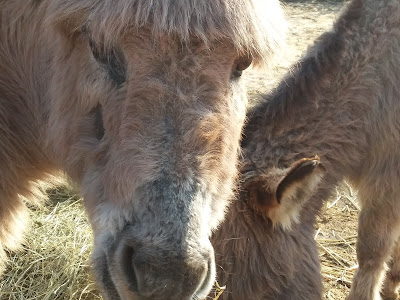 And then there's Helen, who almost daily insists she needs to make a nest in the straw bales.  Each time I have to pluck her out and put her in a coop nest.  I know she's not happy with me.
I can hear you asking, "Janet, why can't you leave her there".  Because of the dogs.  She tends to do this in the mornings and when morning chores are completed and I return to the house, two stinky dogs are allowed out.  I don't trust the dogs and Helen in mixed company.
By the way, I put an old wooden ladder in the run yesterday to try to provide some entertainment for the clucks.  They all scattered into the coop, absolutely sure that monster was going to eat them.  Today they weren't as skiddish so I put some seed on the bottom two rungs.  No one hopped up to snack off the upper rung.  I'm debating whether to put a hen on it and see what happens. 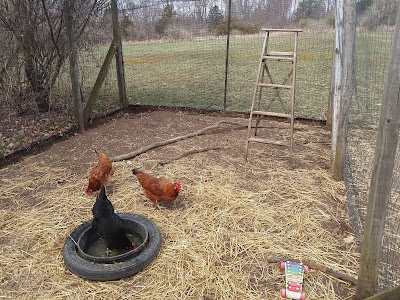 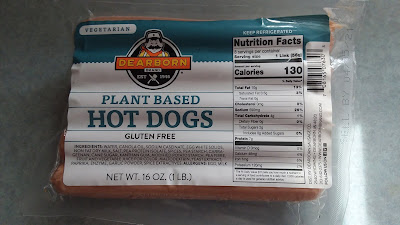 I've tried all manner of vegetarian and vegan hots dogs and sausages.  In my humble opinion, these are most like a conventional hotdog.  No spices or flavor enhancements.  I'm not saying spicy, flavored versions aren't good (I particularly enjoy Field Roast), but if you're trying to emulate the meat version, I'd suggest these.
Posted by Janet @ My Miniature Donkeys at 6:45 PM